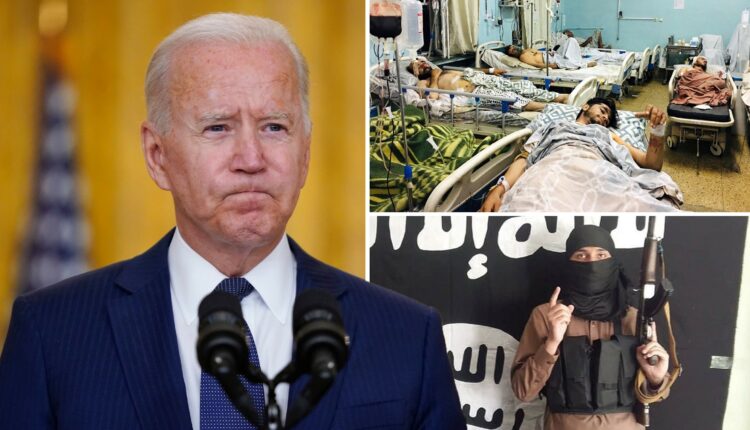 President Joe Biden addressed the terror attacks in Kabul that killed more than a dozen American service members by saying that the US will ‘hunt down’ those who were behind it.

Biden also appeared to, for the first time, admit he bears responsibility for how the ‘messy’ Afghanistan withdrawal has unfolded.

Speaking from the East Room of the White House on Thursday afternoon, hours after the two bombings, Biden said: ‘We’re outraged as well as heartbroken.

‘To those who carried out this attack, as well as anyone who wishes America harm, know this: We will not forgive. We will hunt you down and make you pay.’

Biden called the US service members who died in the explosions – outside Hamid Karzai International Airport and at Baron Hotel nearby – ‘heroes’.

He said: ‘The lives we lost today were lives given in the service of liberty, service of security, service of others. The fallen this day are part of a great, noble company of heroes.’

The president held a moment of silence for the victims. At least 95 Afghans were also killed in the attacks that Isis-K, the Afghan affiliate of the Islamic State (Isis), has claimed responsibility for.

When asked by a reporter where the burden lies for the chaotic and dangerous evacuation situation, Biden replied: ‘I bear responsibility for fundamentally all that’s happened of late’.

However, Biden also blamed former President Donald Trump for an agreement with the Taliban.

He said: ‘But here’s the deal: You know – I wish you’d one day say these things – you know as well as I do that the former president made a deal with the Taliban that he would get all American forces out of Afghanistan by May 1.

‘In return, the commitment was made – and that was a year before – in return, he was given a commitment that the Taliban would continue to attack others, but would not attack any American forces.’

Biden spoke a couple hours after Marine Corps General Frank McKenzie, head of US Central Command, said that 12 US service members were killed and 15 others were injured in the bombings outside Kabul airport.

On Thursday evening, the Department of Defense confirmed the death of a 13th US service member and said that 18 others were wounded.

Those wounded ‘are in the process of being aeromedically evacuated from Afghanistan on specially equipped C-17s with embarked surgical units,’ Central Command spokesperson Captain Bill Urban stated.

Biden said that the US’s evacuation mission will not be deterred by the terror attacks, reiterating McKenzie’s remarks from a Pentagon briefing earlier in the day.

‘America will not be intimidated,’ Biden said.

The president recognized that ‘there are individual groups of individuals – from women’s groups, NGOs and others – who have expressly indicated they want to get out’.

Biden doubled down on sticking to the August 31 deadline to pull all US troops out of Afghanistan, which fell to the Taliban last week.

‘I have never been of the view that we should be sacrificing American lives to try to establish a democratic government in Afghanistan a country that has never once in its entire history been a united country,’ Biden said.

The president’s last words in his news conference were: ‘Ladies and gentlemen, it was time to end a 20-year war’.

Speaking after Biden, White House press secretary Jen Psaki said the US must coordinate with the Taliban to airlift people out. She noted, however, that ‘this is not about relying on the Taliban as an equal partner’.

‘I’m not trying to sugarcoat what we think of the Taliban,’ Psaki said. ‘They are not a group we trust. They are not our friends.’

Psaki said Biden had not yet called the families of Thursday’s victims as the Pentagon was still notifying the next of kin.

Quebec to replace ethics and religious culture class with…