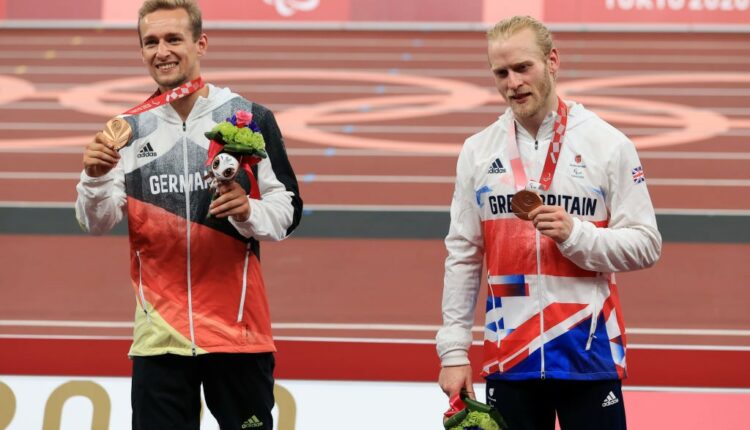 Jonnie Peacock admitted it was tough to take a joint bronze medal in the 100m – T64 after golds at the last two Paralympics, but sent an inspirational message to any children watching, saying: ‘Do what you want to do, don’t let anything hold you back.’

Peacock was left with mixed emotions after the race, going in with the highest hopes after golds in the 100m – T44 in London and Rio, but he was trying to take the positives and promised to come back stronger next time.

‘That race was ridiculously fast,’ the 28-year-old told Channel 4. ‘Watching it back, I hate myself. I felt it in my chest the last 30m leaning backwards. I probably should have won that.

‘I had a hamstring injury in May that put me out.

‘To all the kids at home – do what you want to do, don’t let anything hold you back. Sorry I couldn’t win for you. I’ll win for you next time.’

He added: ‘It’s tough. There’s two ways to take it. I’ve got to be grateful.’

Peacock was right in that the race was extremely quick, as his time of 10.786 would have been good enough for gold in London and Rio, quicker than the times he managed in either of those finals.

Bronze was also tantalisingly close to gold, with Strong finishing in 10.76 and the silver medal claimed in 10.78.