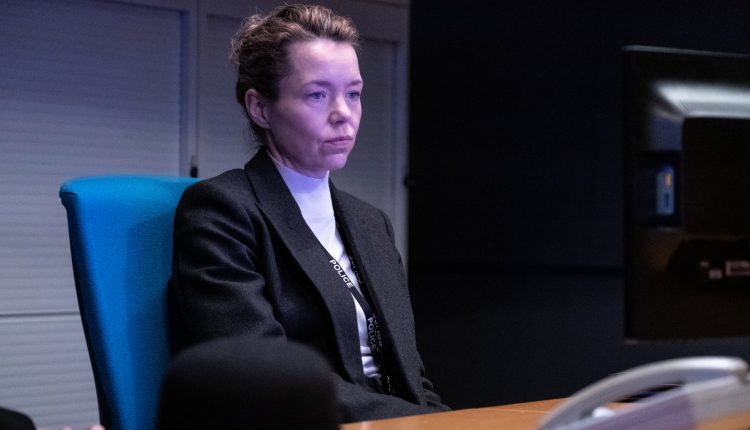 Line of Duty series 6: Anna Maxwell to return as icy DCI Patricia Carmichael as investigation into Jo Davidson heats up

*Warning: This article contains major spoilers for Line of Duty*

The Bafta award winner, 43, will be back on screens from April 18 since DCI Carmichael last appeared in series five.

She was previously brought in as an independent investigator from AC-3 after suspicions mounted over the integrity of Superintendent Ted Hastings.

On her return, Anna said: ‘Pat’s back, I can’t remember what she’s doing there, nor would I be allowed to blab, but suffice to say she’s got some new clobber and she’s ready to bust some balls.’

A huge cliff-hanger has gripped show fans since it’s Sunday’s night return with devotees speculating who could be the mysterious blood relative of DCI Joanne Davidson (Kelly Macdonald).

Viewers have been rewatching last week’s episode in a bid to try and work out whose photo Superintendent Hastings (Adrian Dunbar) was shown at the end of episode four.

Viewers learned that Jo is related to another person in the police records – and they discovered a vital clue via the BBC’s subtitles that narrows things down.

Steve Arnott (Martin Compston) cemented the findings confirmed Jo is related to another person on the system.

And it seems that person is a man, with Steve saying ‘he’ was identified in the findings.

While it wasn’t initially clear from the audio, the subtitles certainly clear things up as it revealed Steve said the blood relative is a ‘he’.

Line of Duty continues on Sunday on BBC One at 9pm.

If you’ve got a celebrity story, video or pictures get in touch with the Metro.co.uk entertainment team by emailing us at [email protected], calling 020 3615 2145 or by visiting our Submit Stuff page – we’d love to hear from you.


MORE : Line of Duty: Who is Jo Davidson related to? All the theories and clues