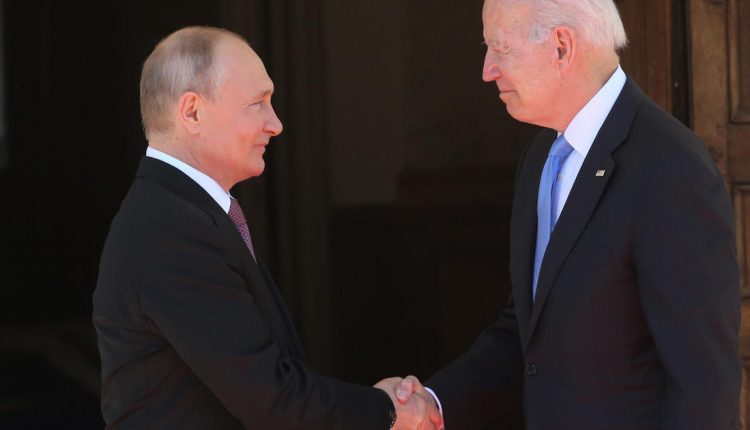 President Biden sat down on Wednesday for his much-anticipated meeting with Russian President Vladimir Putin in Geneva, Switzerland. Mr. Biden was facing off with Putin after a week of alliance-bolstering meetings with America’s closest allies. He attended his first NATO summit as the U.S. leader, his first G-7 conference, and a summit with European Union leaders all within the last week.

Mr. Biden and Putin stood on the front steps of the Geneva hotel hosting the summit and shook hands in front of news cameras before going inside to begin their talks at about 1:30 p.m. local time (7:30 a.m. Eastern).

The leaders were to hold separate news conferences after the summit, which was expected to last up to five hours.

Russia holds huge naval drill ahead of summitAt a news conference on Monday, Mr. Biden declined to say what he wanted out of the meeting with the Russian leader, which comes after a series of cyberattacks on U.S. infrastructure blamed on Russian hackers.

On the front lines of Russia-Ukraine conflict…

The U.S. and its allies have piled pressure on Putin over the cyberattacks and a range of other issues, including his country’s backing of rebels in Ukraine, the crackdown on political dissidents in Russia, including opposition leader Alexey Navalny, American citizens jailed in Russia, and Moscow’s weapons programs.

A recent CBS News poll found that the majority of Americans want Mr. Biden to take a tough stance with Putin, rather than opting for a more cooperative approach with the autocrat known for allowing human rights abuses.

“I’ve been doing this a long time,” Mr. Biden said on Monday when asked what he’d seek from Putin. “The last thing anyone would do is negotiate in front of the world press as to how he’s going to approach a critical meeting with another adversary and/or someone who could be an adversary. It’s the last thing I’m going to do. But I will tell you this: I’m going to make clear to President Putin that there are areas where we can cooperate, if he chooses. And if he chooses not to cooperate and acts in a way that he has in the past, relative to cybersecurity and some other activities, then we will respond. We will respond in kind.”

41m ago
Biden and Putin shake hands before kicking off talks

President Joe Biden and his Russian counterpart Vladimir Putin shook hands on the front steps of the hotel in Geneva, Switzerland that is hosting their summit on Wednesday, before going inside for the hours-long talks.

News cameras were allowed into the room to photograph the two leaders sitting together before the talks began. The presidents were joined in the room for the first session of discussions by U.S. Secretary of State Antony Blinken and Russian Foreign Minister Sergey Lavrov, along with translators for each side.

Putin thanked Mr. Biden for showing initiative to arrange the summit and expressed hope that it would be a productive meeting.

Later sessions were to see a wider group of officials from both sides join the presidents and their top diplomats.

Updated 7:21 AM
Putin arrives in Geneva for summit

Russian President Vladimir Putin arrived in Geneva at about midday local time (6 a.m. Eastern) on Wednesday, flying into Switzerland from Moscow less than an hour before he was expected to shake hands with U.S. President Joe Biden.

Russian President Vladimir Putin walks down stairs from his plane after arriving in Geneva, Switzerland on June 16, 2021, to attend a bilateral summit with U.S. President Joe Biden.

Mr. Biden flew into Geneva on Tuesday after a week of meetings with European allies.

Putin’s spokesman Dmitry Peskov showed up at the hotel in Geneva where the summit is taking place ahead of his boss. He told Russian television in an interview aired before the meeting that Putin expected “difficult” talks with his American counterpart, but that Russia was approaching the summit with a “working” attitude, not a confrontational one.

Peskov said there was a need by both countries to “clear all the rubble” in bilateral relations, noting specifically Moscow’s desire to regain control of Russian-owned properties in the U.S. that were seized by the American government years ago.

Updated 6:55 AM
How to watch Biden’s press conference after meeting Putin

What: Mr. Biden gives a press conference after meeting with PutinDate: Wednesday, June 16 Location:  Villa La Grange, Geneva, SwitzerlandTV: A special report will air on CBS broadcast stationsOnline stream: Live on CBSN in the player above and on your mobile or streaming device.Follow: Live updates on CBSNews.com