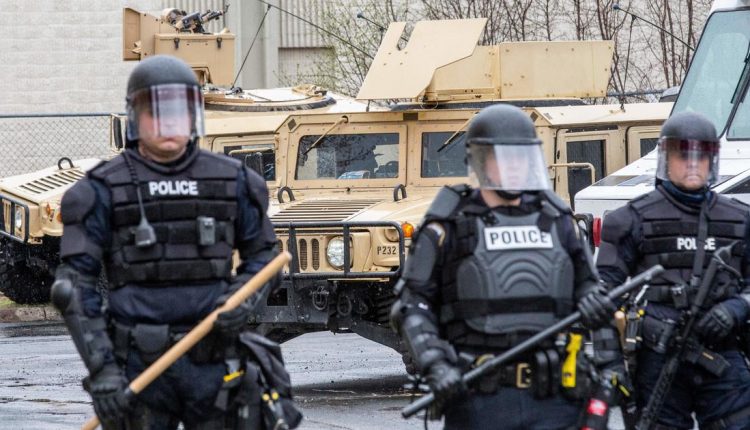 47m ago
“Prayers are not enough”: Vice President Harris comments on shooting

Vice President Kamala Harris on Monday night wrote on Twitter that “Prayers are not enough.”

“Daunte Wright should still be with us,” she wrote. “While an investigation is underway, our nation needs justice and healing, and Daunte’s family needs to know why their child is dead—they deserve answers.”

Prayers are not enough. Daunte Wright should still be with us. While an investigation is underway, our nation needs justice and healing, and Daunte’s family needs to know why their child is dead—they deserve answers.

Police have begun clearing protesters from outside the Brooklyn Center Police Department. Hundreds had gathered outside the building, which is now surrounded by chain link fencing, earlier Monday. A curfew went into effect at 7 p.m. and will last until 6 a.m.

Police gave several orders to disperse but the crowd remained outside the building. Police began deploying gas cannisters and flash bangs around 9:30 p.m. according to CBS Minnesota reporters on the scene.

First flash bangs of the night and now it looks like gas is being deployed. That last one got real loud.. pic.twitter.com/Ad9LBkrlVZ

They just launched several canisters of teargas to the doorway of the apartments across the street @WCCO pic.twitter.com/bemoDYH022

This is the first I’ve seen law enforcement outside the fencing surrounding the Brooklyn Center police department. In formation at the end of the block. Tear gas being fired every few minutes pic.twitter.com/yjAtptO5PY

In addition to Brooklyn Center police officers, state troopers and members of the Minnesota National Guard were stationed outside of the police department, CBS Minnesota reports.

A Black Lives Matter flag is seen after curfew as demonstrators protest the death of Daunte Wright who was shot and killed by a police officer in Brooklyn Center, Minnesota on April 12, 2021.

The Minnesota Department of Public Safety Bureau of Criminal Apprehension on Monday identified Kim Potter as the police officer who shot Daunte Wright on Sunday. She has been a member of the Brooklyn Center Police for 26 years and is on “standard administrative leave,” the BCA added.

Residents of Brooklyn Center are demanding greater accountability following the fatal police shooting of Daunte Wright on Sunday. All happening amid the trial for the ex-officer charged in George Floyd’s death.

About 100 Minnesota National Guard troops “will be supporting efforts to maintain peace in Brooklyn Center,” according to Minnesota Operation Safety Net — the program developed to deal with the ongoing trial of Derek Chauvin. According to OSN, there are already 500 guardsmen supporting the operation.

The Minnesota National Guard said that the number of guardsmen supporting the operation “will continue to grow in the coming days.”

The Hennepin County medical examiner on Monday night said that Daunte Wright died from a gunshot wound to the chest and ruled his manner of death a homicide.

Brooklyn Center City Manager Curt Boganey has been “relieved of his duties,” according to Mayor Mike Elliott. “The deputy city manager will be assuming his duties moving forward,” the mayor added.

Effective immediately our city manager has been relieved of his duties, and the deputy city manager will be assuming his duties moving forward. I will continue to work my hardest to ensure good leadership at all levels of our city government.

Minneapolis and St. Paul, Minnesota, will both be under curfew from 7 p.m. Monday until 6 a.m. Tuesday, Mayors Jacob Frey and Melvin Carter III announced.

Governor Tim Walz also announced a curfew for Hennepin, Ramsey and Anoka Counties. Dakota County officials said it will also observe the curfew Monday night, CBS Minnesota reports. Between those four counties, more than 2.5 million people are affected by the curfew, according to CBS Minnesota.

Three of Minnesota’s major sports teams have postponed games scheduled for Monday. The NBA’s Minnesota Timberwolves, MLB’s Minnesota Twins and the NHL’s Minnesota Wild all announced they would not be playing Monday night.

“Our thoughts remain with the family and friends of Daunte Wright during this difficult time,” the NBA said in a statement.

The Twins said the team “decided it is in the best interests of our fans, staff, players and community to not play today’s game.”

The Wild called the shooting of Wright “heartbreaking.”

An investigation into the officer who shot Daunte Wright is underway, and she’s on administrative leave.

“I think we can look at the video and ascertain whether or not she’ll be returning,” Brooklyn Center Police Chief Tim Gannon told reporters.

Gannon said he believes the officer, described as “very senior,” intended to deploy her Taser.

“This appears to me, from what I viewed and the officer’s reaction and distress immediately after, that this was an accidental discharge that resulted in the tragic death of Mr. Wright,” Gannon said.

The shooting sparked violent protests overnight and clashes with police. The chief defended the use of flash-bangs and tear gas to try to break up the group.

“We had to disperse the crowd because we can’t allow our officers to be harmed,” Gannon said.

Police released bodycam video from the officer who shot Daunte Wright during a press conference Monday. The footage from the unidentified female officer shows Wright exit his car, turn and face the vehicle with his hands behind his back.

Wright quickly gets back into the driver’s seat. As the male officer struggles with Wright, the female officer is seen with a gun in her hands.

“I just shot him,” she says as the car drives away.

President Biden called for “peace and calm” in Minnesota amid the “tragic” death of Daunte Wright.

“I want to make it clear again: There is absolutely no justification, none, for looting. No justification for violence. Peaceful protest? Understandable. And the fact is that we do know that the anger, pain and trauma that exists in the Black community in that environment is real, it’s serious and it’s consequential,” Mr. Biden told reporters in the Oval Office. “But it will not justify violence and/or looting.”

The president made his first public comments about the shooting at a meeting with a bipartisan group of lawmakers about his infrastructure plan. Mr. Biden said he has spoken with Minnesota Governor Tim Walz and local officials but has not yet spoken with Wright’s family.

“Our prayers are with their family,” he said. “It’s really a tragic thing that happened, but I think we got to wait and see what the investigation shows, the entire investigation.”

Mr. Biden told reporters he watched the “fairly graphic” body camera footage of the shooting, but he noted it “remains to be determined” whether the shooting was accidental or intentional.

An attorney for Derek Chauvin, the fired Minneapolis officer charged in George Floyd’s death, asked for the jury in Chauvin’s trial to be further questioned and sequestered in light of the Brooklyn Center shooting.

“This incident last night highlights, I think, brings to the forefront of the jury’s mindset that a verdict in this case is going to have consequences,” defense attorney Eric Nelson said.

Judge Peter Cahill said the Brooklyn Center shooting is a “totally different case.” He said a sequestration order might cause further unease over safety concerns from the jurors: “Oh, I heard about the civil unrest and now the judge is ordering our sequestration.” He said the jury will be sequestered once they begin their deliberations.

Police in another Minneapolis suburb, the city of Brooklyn Park, said in a statement that their officers weren’t involved in the shooting in Brooklyn Center “but did respond to assist Brooklyn Center Police with civil unrest” that followed.

“Numerous buildings” were later looted in Brooklyn Park, police there said, adding that, “Just after 8 p.m., the Brooklyn Park Police Department front door was struck by gunfire shattering the glass.  Access to the public lobbies at both Brooklyn Park Police Buildings has been suspended for safety until further notice.”

Minnesota Department of Public Safety commissioner John Harrington told a news conference in the middle of the night that demonstrators threw rocks and other objects at officers at the Brooklyn Center police headquarters. But most protesters left by a little after 1 a.m. He added that the National Guard was activated and several law enforcement agencies helped quiet things down.

Harrington said some 20 businesses were broken into at the city’s Shingle Creek shopping center.

Brooklyn Center Mayor Mike Elliott announced a curfew for the city until 6 a.m. He tweeted, “We want to make sure everyone is safe. Please be safe and please go home.”

And Brooklyn Center officials said schools will be closed Monday and all instruction will be via distance learning.

Law enforcement formed a human chain around Brooklyn Center Police headquarters as protests continued. Authorities used flashbangs and tear gas to try to break up the crowd, a CBS Minnesota reporter at the scene tweeted:

As the crowd chants “hands up don’t shoot” flashbangs are thrown. Got it in this video @WCCO pic.twitter.com/nMH5jNebbH

LISTEN: tear gas and flashbangs deployed right in front of us pic.twitter.com/rDC8P94XZE

Brooklyn Center has 45 officers in its police department. Looks like most, if not all, are holding this line pic.twitter.com/9dlxlqkpZe

Tear gas is seen as officers stand guard outside the Brooklyn Center Police Department, outside Minneapolis, as trash was bring thrown at them by demonstrators after police shot and killed a man earlier on April 11, 2021.

A woman who said she’s the mother of the man shot and killed by police, Katie Wright, told a crowd of protesters Sunday afternoon her son, 20-year-old Daunte Wright, was that man, CBS Minnesota reports. She said Wright’s girlfriend was in the car with him at the time of the traffic stop. Police say that woman suffered non-life threatening injuries in the crash and was taken to a hospital.

Katie Wright said her son called her to say, “Mom, I’m getting pulled over,” and, “They’re asking about insurance.” She said she then heard officers telling him to get out of the car. When he asked why, officers told him they would explain once he got out. She said officers then told him to put his phone down, and then she heard someone telling her son not to run. She said an officer then ended his call.

She said soon after, her son’s girlfriend called her to say he’d been shot. Wright’s mother said she went to the scene and saw him “lifeless” by his car, which she had given to him just two weeks earlier.

“I just want people to know that if you get pulled over, make sure you put your hands up and don’t make any sudden moves, and don’t have air fresheners in your car because that’s why he got pulled over. And he was only 20 years old and he didn’t deserve to be shot and killed like this,” Wright said.

Netflix is working on a live-action Gundam film