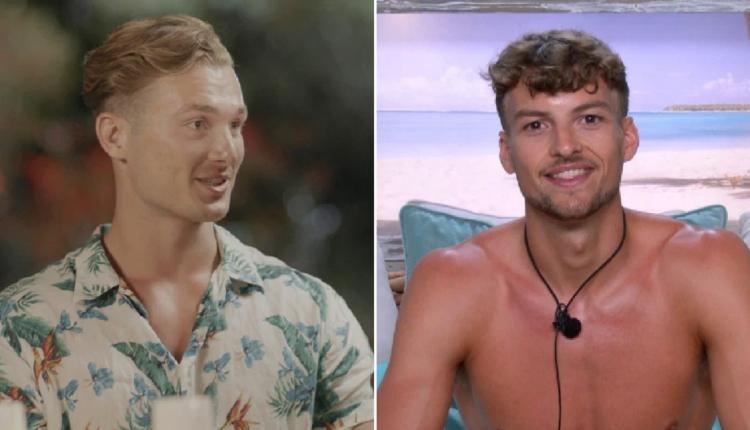 Love Island’s Hugo Hammond shared his surprise connection to Chuggs Wallis in tonight’s episode, much to the delight of viewers.

Chuggs’ arrival to the Majorcan villa alongside fellow new bombshell Liam Reardon was revealed to the islanders by text, with Sharon Gaffka learning that he was whisking her off for a date.

Moments after hearing the unusual name, Hugo made it known that he was definitely already acquainted with the newcomer.

‘I know Chuggs!’ Hugo exclaimed, before adding: ‘I know a Chuggs who was a rugby boy.

Making his connection even clearer, Hugo debriefed the boys on Chuggs as they sat around the fire pit.

‘He’s a good looking lad, plays rugby at uni, got a lot about him,’ he disclosed.

Viewers were in stitches that Hugo and Chuggs’ connection and rushed to social media to comment.

‘I mean…of course HUGO knows CHUGGS,’ wrote one, while others imagined the how hilarious it would be if Hugo had got the wrong Chuggs.

‘I will scream if Chuggs has no idea who Hugo is when he comes in after he’s made it seem like they’re close.’

Chuggs is a 23-year-old business owner from Surrey, and runs a business called Booby Buckets, which sells customised hats and sweatshirts.

Explaining his name while on a date with Sharon, he said: ‘It is my nickname, like cuddles and hugs, Chugs.

‘My christened name is Oliver.’