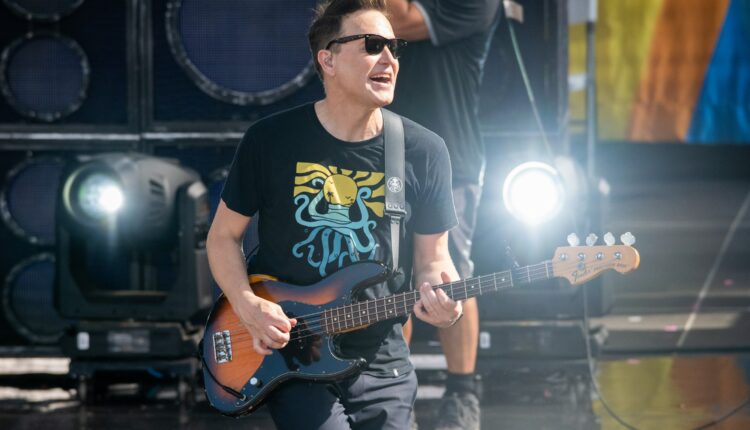 Mark Hoppus, frontman and bassist for the band Blink-182, revealed last month that he had been undergoing chemotherapy for three months. And in a live video this week, Hoppus, 49, shared more details about his diagnosis, the type of cancer he’s dealing with, and how chemotherapy has been going.

In a live Q&A with fans in Chile, Hoppus shared that his cancer is “not bone-related, it’s blood-related. My blood’s trying to kill me.” Specifically, he’s been diagnosed with diffuse large B-cell lymphoma stage 4-A. “It’s entered enough parts of my body that I’m stage IV, which I think is the highest that it goes,” he said.

Hoppus also gave an update on how his chemotherapy has been going. “Let me tell you something that is real and it absolutely sucks: A side effect of the chemotherapy is you get something called ‘chemo brain,’” he explained. “And for me, I forget things that I should have on-call, like names, song titles, anything. People will be talking to me and five minutes later I’ll ask them a question, and they’ll be like, ‘I just told you that five minutes ago.’”

At the time of the recording, Hoppus said he was preparing to go in for a PET scan, which would determine how well the chemotherapy was working. If it doesn’t seem to be helping, a bone marrow transplant may be necessary. But regardless of the results, he will likely need another three rounds of chemo, he said.

Diffuse large B-cell lymphoma is the most common form of non-Hodgkin lymphoma in the U.S., the American Cancer Society (ACS) explains. This type of cancer affects the body’s lymph system, including the white blood cells. It typically grows quickly and progresses aggressively, but does tend to respond well to treatment, the ACS says. There are several treatment options for non-Hodgkin lymphoma, such as chemotherapy, radiation, immunotherapy, the Mayo Clinic says.

In most cases, doctors don’t know what caused someone’s non-Hodgkin lymphoma and many people who develop this type of cancer don’t have any obvious risk factors, the Mayo Clinic explains. But there are some factors, such as taking immune-suppressing drugs or having certain viral infections (like HIV or Epstein-Barr), that can make this cancer more likely. Interestingly, Hoppus shared that his mom had the exact same type of cancer previously and was able to treat it effectively.

Hoppus first spoke publicly about his situation in late June and continues to keep a positive attitude about what the future may hold. “Oh, we’re beating this cancer,” he said in the video this week. “It’s just a matter of time.”

This Breezy Pajama Set Is My New Go-To for Summer