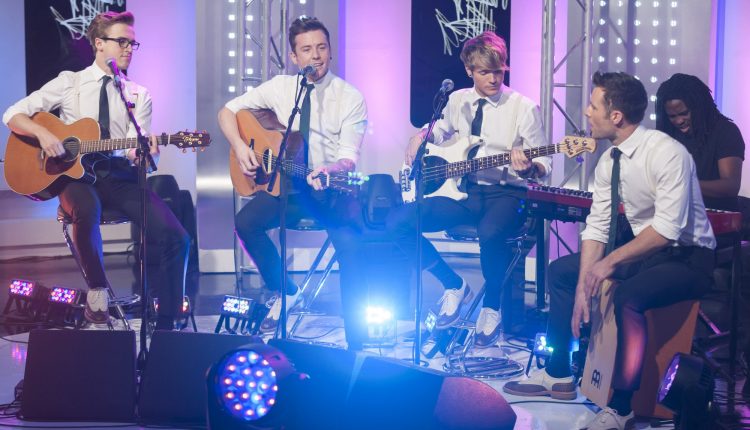 McFly are putting their four-year hiatus firmly behind them after landing their first record deal in 10 years, and the band has admitted they struggled to cope with being apart.

Fans last saw the boys – Harry Judd, Dougie Poynter, Danny Jones and Tom Fletcher – out on road with McBusted, but when that came to an end in 2015, things got difficult for the four-piece.

So much so that Harry has revealed in a new interview that McFly struggled to find a new direction and they all drifted apart, with their relationship becoming strained.

As each band member pursued their own path, jealousies became apparent and it took a therapy session for McFly to put their issues aside and focus on reuniting.

Speaking to The Sun, Harry said: ‘We have all been through a lot individually in the past four years.

‘It got to a point where once all the talking was done, we had one therapy session and things were said, we’d seen each other broken, desperate and sorry enough to each other to be like, “Right, ok, we can move on now.’

Following McFly taking a break, Dougie went on to pursue acting, Danny turned to solo music and became a judge on The Voice Kids, Tom became a best-selling author and Harry, after winning Strictly back in 2011, went off on tour with the show’s other stars Louis Smith, Jay McGuinness and Aston Merrygold.

The distance and the insecurity over what each other was now doing with their time made it hard for the band to regroup, with Harry explaining: ‘It’s not just like a married couple.

‘There’s four of us, so there’s a relationship between each and every single person… it’s a complicated thing.’

Tom agreed that most of the band’s problems came to a head because of the fact they were no longer together. He described their break as an ‘eternity’ and said that as soon as they reunited and started making music, things became ‘easy’ for McFly again.

Now, the band – who are best known for singles such as Star Girl, Obviously and All About You – is back with a brand new single Happiness and a new album, titled Young Dumb Thrills, to boot, after landing a brand new record deal.

While their album isn’t set to drop until November, fans can officially get their hands on its leading single, Happiness, as of Thursday (30 July).

Happiness is the band’s first single in seven years and describing what it’s all about in a statement shared ahead of its release, Danny said: ‘There’s that hands-in-the-air feeling about it, like when you’re drunk or you’re having a barbecue. ‘


MORE : Normal People’s Paul Mescal performs with pal Dermot Kennedy for special gig: ‘It’ll be nice to see him with his clothes on’

Psychic who said crash took his ‘powers’ fails to predict…