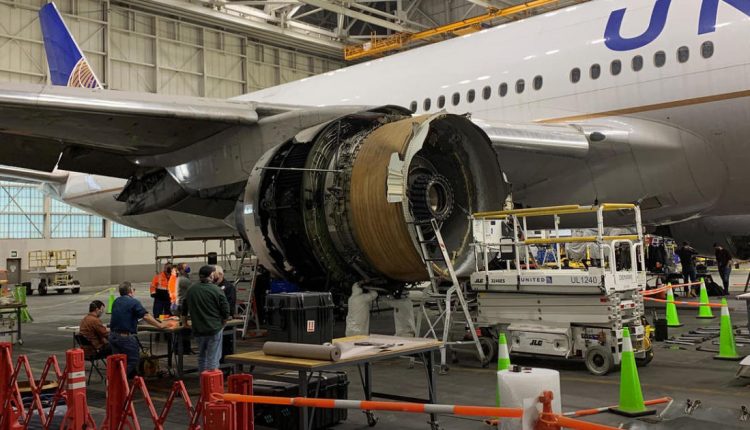 According to CBS Denver, Sumwalt said the engine made a loud bang and started vibrating about four minutes after takeoff from Denver International Airport. He said the plane was about 12,000 feet above homes at the time.

Sumwalt said two fan blades in the engine broke – one at the base where it meets the hub and the second about mid-way. He said the first blade caused “overload damage” to the second blade.

One of the blades was found on a soccer field.

Sumwalt said investigators will try to determine how long the blades had suffered the fatigue.

Federal Aviation Administration records show the plane involved was nearly 26 years old, CBS Denver says, but FAA and NTSB officials said they couldn’t clarify whether the engine that failed was an original part or was installed later on.

Photos taken Saturday after the plane returned to the Denver airport show a gaping hole under the right wing, suggesting some of the engine debris struck the plane itself.

Image taken Feb. 22, 2021, shows the damage to the wing and the body fairing of the United Airlines flight 328 Boeing 777-200 following an engine failure incident Saturday.

Sumwalt acknowledged the aircraft’s underbody was damaged but said the damage wasn’t structural. The damaged part is a composite fairing that smooths out the plane to make it more aerodynamic.

Sumwalt said the fire handle in the cockpit was activated and two fire bottles in the engine were discharged. He said the fuel flow was turned off, and investigators will look into what continued to fuel the fire despite the precautions that were taken.

The engine examination will include a look into its maintenance history.

Sumwalt added the agency will compare this event to others in the past.

“Our mission is to understand not only what happened but why it happened so that we can keep it from happening again,” Sumwalt emphasized.

More than 200 passengers were on the Hawaii-bound flight. No one was hurt on the plane or on the ground. The aircraft returned safely to the airport about 20 minutes after takeoff.

The Denver incident followed one in December involving a Japan Airlines 777 with the same type of engine as well as an engine problem in a February 2018 United flight.

“There might be a common theme” among the three incidents “but until the investigation is complete, we don’t know that,” said Scott Hamilton, of aviation news site Leeham News.

Boeing said Monday all 128 of the 777s with the same Pratt & Whitney engines were grounded worldwide in the wake of Saturday’s emergency landing. Sixty-nine were in service and 59 were in storage.

Besides United, which took 24 planes out of service, affected carriers included Japan’s Japan Airlines and All Nippon and South Korea’s Asiana and Korean Air.

Egyptian state newspaper Al Ahram reported Monday that national carrier Egyptair is grounding four planes with the Pratt & Whitney engine, though they weren’t in service, a source close to the manufacturer said.

— Agence France-Presse contributed to this report.

The Case Against Brooke Skylar Richardson