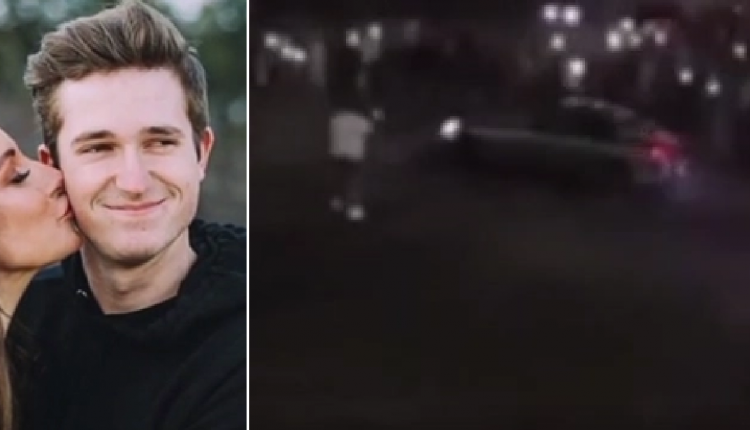 A student is gravely-ill in hospital with severe brain damage after he was struck by a hit-and-run driver at an illegal street rally.

Austin Dubinetskiy, 21, was at a ‘sideshow’on Tuesday in Sacramento, California, when the driver who was performing a donut stunt hit him.

The incident was caught on camera, where the car is seen screeching through a circle of about 700 people. Dubinetskiy ran into the center of the circle when the front of the car barrels into the student.

His father Leo told Fox40 that he could not bring himself to watch the video of his son at the rally.

‘It was really hard to take that phone call,’ he said. ‘He’s not just my kid, he’s my best friend.’

His son underwent brain surgery, but the doctors said he has a long road to recovery. Leo said he holds his son’s hand with hope in the hospital room with hope that his love will heal him.

‘It’s really hard to see him go through this,’ Leo said. ‘It’s really emotional every time you look at him. ‘I just gotta take one day at a time and just hope for the best.’

He said that he hopes other kids will learn a lesson from what happened to his son and avoid these types of illegal events in the future.

‘At night, it’s really dangerous,’ Leo said. ‘Don’t go to these kind of crowds, you know, stay away. Be more smart about it.’

Police are searching for the driver, who sped away, and are investigating the incident as a hit-and-run.

“I just gotta take one day at a time and just hope for the best,” he continued.

Police said they are searching for the driver, who sped away, and are investigating the incident as a hit-and-run. They said two citations were issued during the sideshow.

From Robert Sheehan to Iwan Rheon: What happened to the cast of Misfits as hit show returns to Netflix?