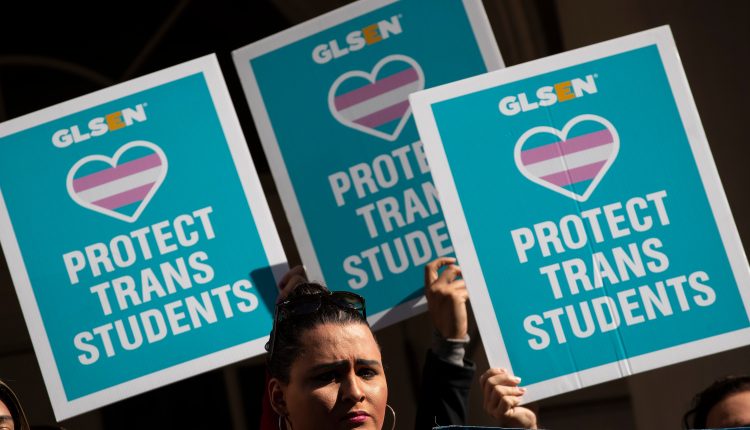 This story originally appeared on them.

Less than three months into the new year, Republican lawmakers have already introduced a record number of anti-trans bills across the country.

According to a report published on March 7 by Axios, at least 73 pieces of legislation have already been put forward in state legislatures targeting members of the transgender community. Of those proposals, 65 single-out trans youth, such as bills prohibiting the kinds of medical care doctors can offer trans minors and others seeking to limit the participation of trans student-athletes in school sports. The latter make up the vast majority of right-wing bills focused on trans youth (41 bills in 2021 so far).

Notable examples include legislative efforts by South Dakota and Mississippi, both of which passed bills in the past week blocking trans girls from competing in school athletics in accordance with their gender identity. After being approved by their respective Houses and Senates, their governors have vowed to sign them.

These would be the first bills of their kind to become law in the U.S. after numerous attempts to pass anti-trans sports bills in previous years. In 2019 a bill targeting trans student-athletes failed in the South Dakota House by just one vote.

According to Axios, the momentum reflects an explosion in the number of anti-trans bills pushed by conservative lawmakers in recent years. Per the website’s tracking numbers, 54 pieces of legislation were introduced in 2020 seeking to discriminate against members of the community, marking a 35% increase in just a year’s time. In 2019, 24 bills sought to deny resources and basic protections to trans youth and adults.

The surge in bills aimed at transgender youth has been especially steep. Legislation focused on young trans people comprised 41 of the discriminatory bills in 2020 and seven in 2019. That’s a massive eightfold increase in only two years.

While Mississippi governor Tate Reeves suggested that the state’s Senate Bill 2536 was an answer to President Joe Biden’s recent order affirming the enforcement of LGBTQ+ protections across federal policy, others say the tidal wave of anti-trans bills is a broader political calculation. Dan Cox, the director of the conservative public policy think tank American Enterprise Institute, said that attacking trans kids “seems to be a winning issue for Republicans, at least in the places where they’re fighting it most aggressively.”

“On the Democratic side, this is not an issue that really excites the base,” he claimed in an interview with Axios. “But on the right, I think these issues are really, really salient, so it tends to fire up folks disproportionately on the right than the left.”

With a recent Associated Press story finding that almost no Republican supporters of these bills could cite examples of trans students competing in school athletics in their area, others have also noted that the issue is about energizing the GOP base. Penny Nance, president of Concerned Women for America, recently told Politico that she thinks trans student athletics is the “wedge issue that will bring suburban women back to the polls and increase their support for Republicans.”

“Republicans would be foolish not to lean into it,” Nance said.

These efforts have also been supported by far-right lobby groups like Alliance Defending Freedom (ADF), as them has previously reported. The organization, which authored dozens of anti-trans bills in previous years, teamed up with The Heritage Foundation and Family Policy Alliance to create a website allowing Republican lawmakers to download model legislation to introduce in their state legislature.

ADF has a storied history of opposing LGBTQ+ equality. In addition to defending Masterpiece Cakeshop plaintiff Jack Phillips in court (whose refusal to create a cake for a gay couple in 2012 became the basis of a 2018 Supreme Court case), the organization has fought to defend sodomy bans, opposed the legislation of same-sex marriage, and lobbied to preserve foreign laws mandating trans sterilization.

Pep, xG, MNF and VAR all the scourge of modern football…