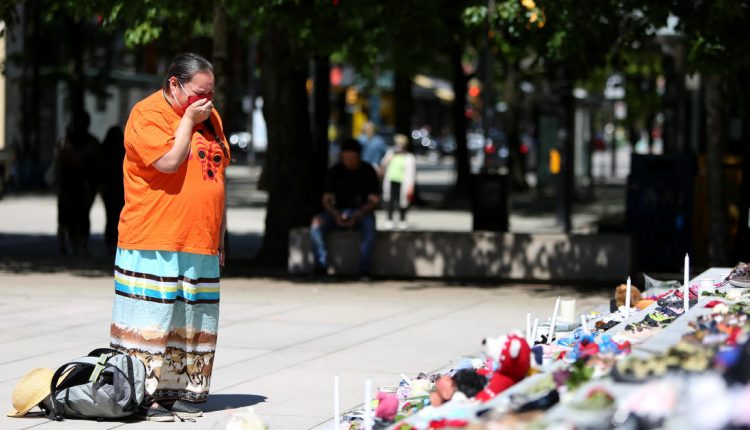 Remains of over 200 indigenous children found

Remains of over 200 indigenous children found…

The remains of 215 children, some as young as 3 years old, have been found buried on the site of what was once Canada’s largest Indigenous residential school — one of the institutions that held children taken from families across the nation.

Chief Rosanne Casimir of the Tk’emlups te Secwépemc First Nation said in a news release that the remains were confirmed last weekend with the help of ground-penetrating radar.

More bodies may be found because there are more areas to search on the school grounds, Casimir said Friday.

In an earlier release, she called the discovery an “unthinkable loss that was spoken about but never documented at the Kamloops Indian Residential School.”

From the 19th century until the 1970s, more than 150,000 First Nations children were required to attend state-funded Christian schools as part of a program to assimilate them into Canadian society. They were forced to convert to Christianity and not allowed to speak their native languages. Many were beaten and verbally abused, and up to 6,000 are said to have died.

A woman mourns over 215 pairs of kids shoes outside Vancouver Art Gallery during a memorial on May 29, 2021 in Vancouver, British Columbia, Canada.

The Canadian government apologized in Parliament in 2008 and admitted that physical and sexual abuse in the schools was rampant. Many students recall being beaten for speaking their native languages; they also lost touch with their parents and customs.

Indigenous leaders have cited that legacy of abuse and isolation as the root cause of epidemic rates of alcoholism and drug addiction on reservations.

A report more than five years ago by a Truth and Reconciliation Commission said at least 3,200 children had died amid abuse and neglect, and it said it had reports of at least 51 deaths at the Kamloops school alone between 1915 and 1963.

“This really resurfaces the issue of residential schools and the wounds from this legacy of genocide towards Indigenous people,” Terry Teegee, Assembly of First Nations regional chief for British Colombia, said Friday.

People gather outside Vancouver Art Gallery, where 215 pairs of kids shoes displayed on May 29, 2021 in Vancouver, British Columbia, Canada.


British Columbia Premier John Horgan said he was “horrified and heartbroken” to learn of the discovery, calling it a tragedy of “unimaginable proportions” that highlights the violence and consequences of the residential school system.

The Kamloops school operated between 1890 and 1969, when the federal government took over operations from the Catholic Church and operated it as a day school until it closed in 1978.

Casimir said it’s believed the deaths are undocumented, although a local museum archivist is working with the Royal British Columbia Museum to see if any records of the deaths can be found.

“Given the size of the school, with up to 500 students registered and attending at any one time, we understand that this confirmed loss affects First Nations communities across British Columbia and beyond,” Casimir said in the initial release issued late Thursday.

The leadership of the Tk’emlups community “acknowledges their responsibility to caretake for these lost children,” Casimir said.

Access to the latest technology allows for a true accounting of the missing children and will hopefully bring some peace and closure to those lives lost, she said in the release.

People gather outside Vancouver Art Gallery, where 215 pairs of kids shoes displayed on May 29, 2021 in Vancouver, British Columbia, Canada.


Casimir said band officials are informing community members and surrounding communities that had children who attended the school.

The First Nations Health Authority called the discovery of the remains “extremely painful” and said in a website posting that it “will have a significant impact on the Tk’emlúps community and in the communities served by this residential school.”

The authority’s CEO, Richard Jock, said the discovery “illustrates the damaging and lasting impacts that the residential school system continues to have on First Nations people, their families and communities,.”

Nicole Schabus, a law professor at Thompson Rivers University, said each of her first-year law students at the Kamloops university spends at least one day at the former residential school speaking with survivors about conditions they had endured.

She said she did not hear survivors talk about an unmarked grave area, “but they all talk about the kids who didn’t make it.”