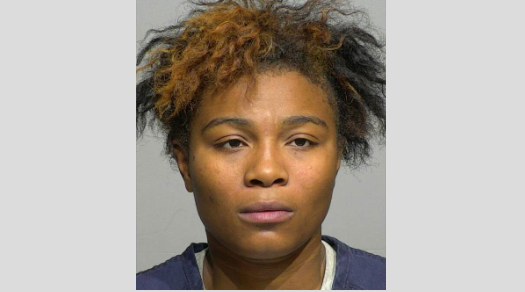 A mother broke down in tears as she admitted to shooting her two-year-old daughter dead, which she said was an accident, police said.

Jasmine Daniels, 22, has been charged with the murder of her daughter, Zymeiia Stevens, in Milwaukee, Wisconsin.

Police responded to Daniels’ home on July 21 and spoke to witnesses who told officers they saw Daniels ‘screaming frantically while holding the body of a child.’ Neighbors added that the toddler was ‘covered in blood,’ according to a criminal complaint obtained by Oxygen.

A trail of bled led police into Daniels home and down to her basement. Investigators would later find a brass bulled lodged in a basement wall and also discovered an amount of cocaine, as well as a Glock magazine.

Zymeiia was pronounced dead as she was rushed to the Children’s Hospital. She had been shot in the arm, but a medical examiner said the bullet passed through her arm and into her lungs.

During the investigation, Daniels allegedly lied to police multiple times about who shot her daughter before conceded that she did it.

She first claimed she heard three or four gunshots and discovered her daughter ‘leaking’ blood, according to the criminal complaint. She then changed her story and allegedly blamed her 3-year-old son, who she claimed mishandled a pistol that was left on a table when she was not looking.

‘He didn’t mean to do it,’ Daniels told investigators.

After police found the evidence in her basement, she changed her story a third time and said a stranger broke into her home and shot the child. Daniels then made a fourth claim that an individual named ‘Eddie’ killed her daughter.

However, video evidence did not show anyone else entering her home on the evening that Zymeiia was shot.

Daniels eventually copped to the shooting and said she ‘accidentally’ fired the gun while ‘playing around’ with the firearm.

‘I accidentally did it,’ she said while crying.

Daniels son later backed his mother’s story and she appeared in court on Sunday via video conference.

She is due back in court on August 4.