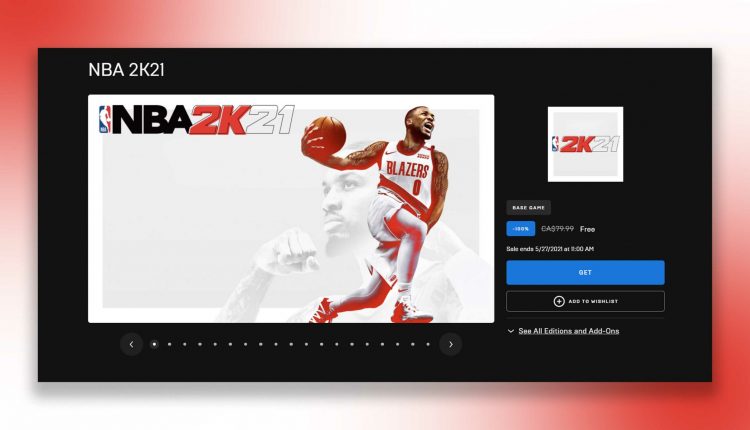 NBA 2K21 is free on the Epic Games Store on PC If you game on PC and are fond of sports titles, you might want to download the Epic Games Launcher to get a free copy of NBA 2K21.

You can get the game for free until May 27th, and once you claim it, you get to keep it forever — this isn’t a free trial.

Head over to Epic’s website to claim the title.

This is a pretty big game for the service, which has been using free games to lure people into its online game store for the past few years. During the Epic V Apple trial, we learned that Epic paid $1.5 million USD for Batman Arkham (about $1.8 million CAD), $350,000 USD (roughly $420,000 CAD) for Limbo, $1.4 million USD (approximately $1.7 million CAD) for Subnautica and a grand total of $0 for Metro 2033 Redux. Who knows how much NBA 2k21 cost the gaming giant.

NBA 2k21 is just the tip of the iceberg as Epic kicks off its Mega Sale that ends on June 17th. The company says it will release a new free game every Thursday until then.

This Boho Beach Cover-Up Can Upgrade a Simple Bikini Look