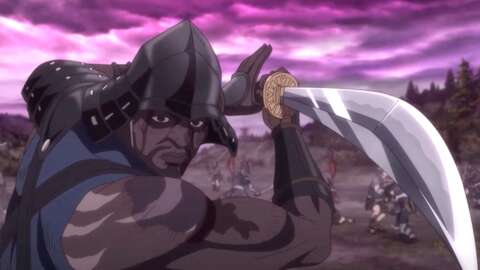 The new trailer for the Netflix anime show Yasuke has been released. The series stars LaKeith Stanfield, and it releases on April 29.

The show is loosely based on the true story of Yasuke, a warrior of African descent who became renowned in medieval Japan. Trailer shows Yasuke arriving in Japan as a servant, and entering the service of Lord Nobunaga as a samurai. The series is taking a fantasy-based approach to the story, with magic, monsters, and mecha alongside plenty of sword action–check it out below:

Yasuke consists of six episodes. The show is created by LeSean Thomas, who also made the 2019 animated show Cannon Busters for Netflix. Stanfield, who was recently Oscar-nominated for his role in Judas and the Black Messiah, is an executive producer as well as the voice of Yasuke, and the soundtrack is by acclaimed electronic producer Flying Lotus.

In a recent interview with Wired, Thomas spoke about what drew him to the project. “Japanese anime has become very popular among Americans and in particular the African American community,” he said. “And there’s a lot of back and forth among fans about, you know, individualism and xenophobia in Japan. I felt like, who can refute this guy who actually served one of the most important figures in Japanese history?”

The Last Of Us 3: Naughty Dog’s Neil Druckmann Weighs In