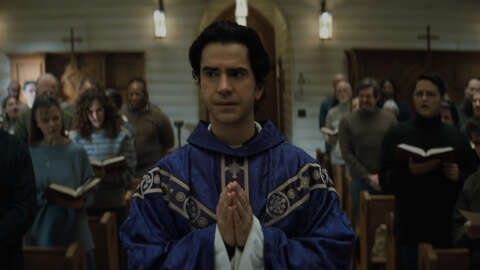 Mike Flanagan is back at Netflix with a new horror mini-series, and it’s tackling the horrors of faith, devotion, and addiction.

This year Netflix and series creator Mike Flanagan are doing something a little different for the Halloween season. There won’t be a new entry into the Haunting Of anthology series that gave us the shows Hill House and Bly Manor. Instead, we’ve got a brand-new, original horror mini-series by the same team (featuring a handful of the same actors) called Midnight Mass, and while it’s not the same sort of loose adaptation of a piece of classic literature as those previous shows, it’s sure to scratch the same itch for fans while still bringing plenty of surprises. Midnight Mass brings the thoughtful, evocative horror that Flanagan has made his name with, while also delivering standout performances and some incredibly inventive, entirely unexpected spins on familiar conventions that will keep you guessing until the very end.

Midnight Mass tells the story of an isolated island fishing community that has fallen on some less-than-ideal times–a past oil spill caused irreversible damage to the ecosystem and fish are scarce, so families are struggling. But change comes in the form of two new arrivals–one, Riley Flynn (Zach Gilford), the son of an island family who spent several years in prison on the mainland after a drunk driving accident, and another, a mysterious young priest who has come to take the place of the island’s extremely elderly Monsignor Pruitt.

According to the new priest, Father Paul (Hamish Linklater), Pruitt fell very ill on a pilgrimage trip to Jerusalem–a trip many of the island’s residents thought was a bad idea in the first place, given the Monsignor was pushing 80 years old when he boarded the plane. Still, Father Paul seems alright and is more than happy to serve the island’s devoutly Catholic community with a sort of charming, affable energy that’s completely at odds with a string of strange occurrences that begin happening all over the island following his arrival.

From here, it may be easy for horror fans to start connecting dots and making assumptions–scary priest stories are plentiful in the genre, and who doesn’t love a good Stephen King-flavored island community beset by a terrible evil? But this is where you’ll need to remember that this is a Mike Flanagan show and as such, all those expectations you might have about traditional horror stories and traditional horror monsters are only being teed up to be subverted.

Linklater’s Father Paul and Gilford’s Riley are joined by the rest of the island’s insular community. There are Flanagan mainstays: Kate Seigel as Erin Greene, a childhood friend of Riley; Robert Longstreet as Joe Collie, the island drunk; Henry Thomas as Ed Flynn, Riley’s father; and Rahul Kohli as Sheriff Hassan, a newcomer to the community and, notably, one of the island’s two Muslims. The other is his son, Ali (Rahul Abburi), who is struggling to find his place in the town’s extremely tiny population of teens. Rounding out the main cast is the puritanical Bev Keane (Samatha Sloyan); Leeza (Annarah Cymone), a young girl who was paralyzed in a terrible accident; and the kind-hearted Annie Flynn (Kristen Lehman), Riley’s mother.

It’s a stacked cast, and while the story ostensibly focuses on Father Paul, Riley, and Erin, everyone has something to do that makes a major impact over the course of the seven episodes–which is, put lightly, a delight. While Midnight Mass never attempts to pull off the same tricks as Bly or Hill House with overlapping timelines and flashbacks, it does showcase Flanagan’s ability to juggle an intricate web of related stories spread out across a large sampling of characters, all of which have something unique to offer.

While the entire roster is worth noting, Linklater and Longstreet are two of the major standouts in the ensemble. Father Paul would have been a very easy character to turn into a caricature–there is absolutely no shortage of sinister priests in horror to pick from, ranging from the overtly monstrous to the ones who espouse the sort of cool youth pastor cult leader vibe. Yet Father Paul is none of these things, and while you may be able to anticipate parts of his story arc from the very beginning, the biggest (and most brutal) pieces rest on Linklater’s relentless pursuit to imbue Father Paul with empathy and kindness that make him anything but a traditional villain.

Meanwhile, Robert Longstreet’s Joe Collie is a worthy successor to Hill House’s tragic caretaker, Mr. Dudley. A massive portion of Midnight Mass relies on its actors being able to both deliver and receive monologues, and Collie sits at the center of two of the show’s most powerful moments, not only because Longstreet himself inhabits the character perfectly, but because he reflects the horrors happening around him back in ways that will hit you right in the chest.

It won’t surprise you to hear that at its heart, Midnight Mass is a story about faith–but it’s never interested in easy answers or expected morality plays. There are certainly clear villains and monsters (some of which are literal, others who are less so), but there are much more ambiguous ones in the mix, too–and together, they coalesce into something that isn’t the sort of horror story you’d tell around a campfire or put on at a Halloween party. Like both Bly and Hill House, Midnight Mass deftly avoids relishing in the brutality it inflicts upon its characters and instead builds the horror out of how deeply they care–be it about one another, themselves, their faith, their futures, or their pasts. As such, you’re definitely less likely to be hiding behind your hands or jumping out of your seat as you watch, and instead sitting stock-still, feeling like you just can’t turn away even though you know something absolutely horrible is about to happen.

And when it comes to those horrible things, they range from emotionally devastating to fantastically violent, but each of them gives the impression of a very intentional craftsmanship. Flanagan and his team obviously worked very hard to ensure that even the most graphic moments were done with clear purpose, never just to shock or simply unsettle. Even in early episodes that are packed with what feel like more traditional horror tropes–thunderstorms, mysterious strangers, inexplicable “natural” disasters, creeping silhouettes of what might be monsters hiding in the dark–each scare is done in service to the larger thesis of the show.

That said, if by now you aren’t on board with Flanagan’s specific style and niche within the horror genre, Midnight Mass is unlikely to make a case to win you over. It’s a slow-burn story, rife with big emotional moments and esoteric debates that never get any easier to stomach even when they’re buffered by supernatural creatures. It’s less a show about spooks and monsters and more a tragedy that just so happens to have spooks and monsters in it. If that’s a train you’re already riding after shows like Hill House and Bly, however–welcome back aboard. Midnight Mass is everything you could ask for and more.