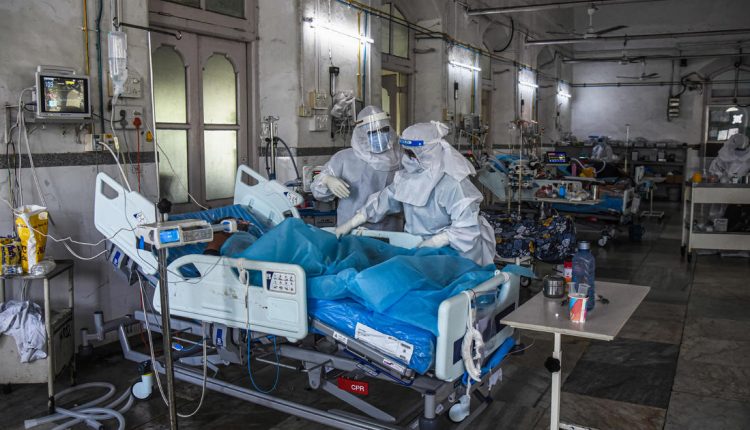 The country has reported more than 28,000 cases of the rare fungal infection, now increasingly seen in COVID-19 patients and survivors.

More than 85% of the reported cases of mucormycosis, which has a high mortality rate, have a history of COVID-19, India’s Health Minister Dr. Harsh Vardhan said last week.

Coronavirus patients, particularly those with diabetes, are prone to the mucor mould that’s primarily found in soil, manure, and decaying fruits and vegetables. It’s dangerously prevalent where hygiene is lacking, like in some of the rural areas.

Healthcare worker Shama Shaikh (R), 53, cares for a patient who has Covid-19 in an ICU ward at the government-run St. George hospital on May 27, 2021 in Mumbai, India. India’s prolonged and devastating wave of Covid-19 infections has gripped cities and overwhelmed health resources.

A study by the U.S. Centers for Disease Control and Prevention published in its New Infectious Diseases journal has shown that between September and December 2020, a 2.1-fold rise in black fungus cases was seen in India, as compared to the corresponding period during the previous year.

“It causes a lot of infection, a lot of mortality if left undiagnosed and untreated,” Dr. Chand Wattal, head of the Clinical Microbiology at New Delhi’s Ganga Ram Hospital, told CBS News.

The fungus attacks the nose, eyes, and brain causing blackening over the areas. In severe cases, doctors commonly have to remove the sinus tissue, and even the eyes. And when it attacks the brain, the chances of the patient’s survival diminish.

“The fungus eats whatever comes its way and causes necrosis because it attacks the blood supply to that area… turning them black,” Wattal said. “Mucormycosis was always a serious infection, even in non-COVID times… it has cropped up more in COVID times.”

Doctors say the use of steroids in the treatment of COVID-19 compromises patient’s immune system, making them more vulnerable to the fungal infection.

A number of Indian states have reported cases of the fungal infection. Among the worst affected is Maharashtra, with 7,395 cases. That state is also the worst affected by COVID-19, with 5.9 million cases. The other states with a large number of cases are Gujarat, Uttar Pradesh, Madhya Pradesh, Rajasthan, Haryana, Karnataka and Delhi, according to the data released by India’s health ministry.

Several states have reported a shortage of the vital drug, Liposomal Amphotericin-B, which is used to treat the illness. The government has also banned its export for now. India is fighting the spread of the fungal infection at a time when the second wave of COVID-19 is waning, but the authorities are already preparing for a third wave, as much of the country has eased restrictions.

On Sunday, the country reported less than 60,000 new cases for the first time in 80 days, taking the total toll to 29.8 million. India is only behind the U.S. which has more than 33.5 million coronavirus caseload. More than 386,000 people have died of the coronavirus in India, half of them in the last two months alone, according to the Indian government official data. But reports say the real numbers and death toll could be much higher.

India struggles with COVID-19 as a new infection targets survivors