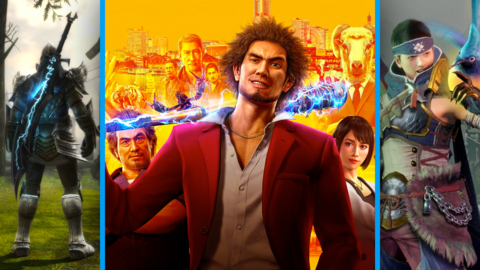 March is upon us, and it’s looking to be an extremely good month for RPG fans and anyone with a Nintendo Switch. Monster Hunter Rise brings intense battles against enormous creatures to the very-much-not-enormous Nintendo Switch, and the cooperative experts at Hazelight launch their next adventure It Takes Two this month, as well.

Below, you can see the biggest game releases in March on all major platforms. You can also check out our video games release dates of 2021 article for a comprehensive list of the whole year.

It’s available on PC, PlayStation, and Xbox already, but Respawn’s Apex Legends has been absent on the Nintendo Switch for more than two years. That is finally changing on March 9, with the game support cross-platform play and all the same features as the versions on more-powerful systems. On Switch, you’ll get 30 free levels for the Season 8 Battle Pass as well as a double XP bonus for the first two weeks. Plus, the port is being handled by the wizards at Panic Button, so we’re confident it’s going to run smoothly.

Eccentric director Josef Fares–has built a reputation for himself and studio Hazelight as a master of cooperative adventure. We saw it with the multiplayer-only A Way Out, and Hazelight’s It Takes Two, as the name suggests, will also be multiplayer-only. A more colorful and whimsical take on the concept than its predecessor, It Takes Two looks like Fares’ take on a game by Double Fine or Media Molecule, and the game comes with an online Friend Pass so someone can join you without buying it.

Monster Hunter games had a big following on handheld systems, including 3DS, before the massively successful Monster Hunter World released on consoles and PC. The franchise is coming back to Nintendo with Monster Hunter Rise, a full-fledged role-playing adventure complete with wyvern riding and a new “Wirebug” tool that lets you go almost anywhere. Though it’s perfect for shorter play sessions, it isn’t a watered-down experience, and it should also be a good entry point for newcomers.

The products discussed here were independently chosen by our editors. GameSpot may get a share of the revenue if you buy anything featured on our site.