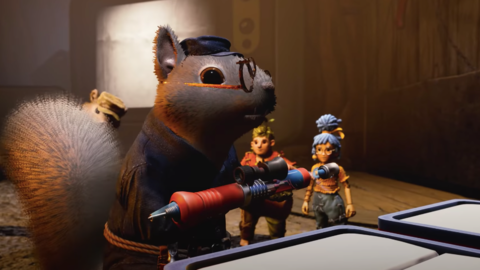 A new trailer for Josef Fares’ new co-op game It Takes Two has arrived, showing off more of the gameplay and providing some new context and insight into the story.

It Takes Two follows the story of Cody and May, a couple who are struggling in their relationship and are seeking a divorce. Their child is upset by this, and through some magic, turns them into dolls that get sucked into a fantastical world they must explore. They are accompanied by a walking and talking book of love on their journey who helps them pick up the pieces of their relationship in a number of unusual ways.

Fares, who narrates the gameplay video, says the idea in It Takes Two is to marry the narrative and the gameplay. As an example, one level focuses on the theme of “attraction,” and in this mission, each player is provided with a piece of a magnet. The two must work together to solve puzzles and defeat enemies, and they can only do it together.

Time is also a pressing issue in many relationships, and this is true for Cody and May. So another level allows players to control time, which opens up a number of exciting gameplay opportunities, as you’ll see in the video. And another level in It Takes Two features an epic battle between squirrels and wasps where Cody and May must combine forces to survive.

The video also touches on the various mini-games you can find and take part in. It all looks very charming and fun.

It Takes Two is developed by Fares’ relatively small studio at Hazelight. Like Hazelight’s A Way Out, It Takes Two can only be played in co-op, either by local split-screen or via online. Thankfully, the game comes with a free “friend’s pass” that allows you to play with someone even if they haven’t bought the game.

As for what Fares might make next, he told Polygon that he wants to “f**k sh*t up creatively.” He is considering ideas for an open-world game and an RPG, but the most likely bet is that he’ll return with another co-op game next. “I love it too much,” he said.