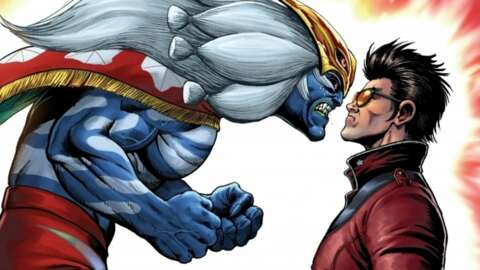 SPOILER WARNING: Be careful! No More Heroes 3 is a game filled with surprises, and sometimes boss fights don’t always go as expected. In other words, we recommend not reading the boss strategy until you’ve actually started fighting the boss to avoid spoiling some of the game’s best moments!

Gold Joe is your second major boss battle in No More Heroes 3. While he has some unique tricks up his sleeve, he’s not too tough once you know how to counter them. For more guides, be sure to check out our No More Heroes 3 beginner’s tips.

How to Defeat Gold Joe

Unlike Mr. Blackhole, Gold Joe is a small fighter who generally prefers to fight you at close range with his arsenal of swords. His sword strikes can be parried and dodged, giving you openings to really wail on him. However, you need to be careful when dodging around him because the arena’s edges are electrified and will cause damage. Be careful not to dodge or run into the wall, or you’ll be regretting it very quickly!

Gold Joe’s specialty, polarity attacks, are among his most dangerous–but they can also provide a great opportunity to get in and do damage. You’ll notice that there are blue and red colored blocks all over the arena, and stepping on one will change Travis’s polarity. Gold Joe will create a forcefield around himself during a polarity attack and try to latch onto you with a magnetic attraction beam, dragging you into a damaging flurry of blades near his body. If you’re of the opposite polarity, you’ll be sucked in very quickly! The key to breaking this attack is to look at the color of the forcefield, then step onto a block on the arena that matches the color. Then, run towards him to repel him back into the damage wall. If you do it quickly and correctly, you will damage him and send him sprawling on the ground for some free damage. Use this time to try and activate your Death Reel!

Like most of the bosses, his attacks change at different health levels. At 2/3 heath, he will gain a new ranged attack. Lasers will appear in rows of straight lines around the arena. Move out of the way before they fire their shots, and you’re in the clear. At 1/3 health, he will attempt to turn the tables by implementing a new attack into the mix: using his polarity to repel you into the damage wall instead of drawing you in. To counter this, step on a tile of the opposite polarity to his, then run in to get some strikes on him.

Gold Joe is vulnerable to stuns, throws, and knockdowns, so some players might actually find this battle easier than the previous fight. Keep utilizing your attack opportunities with well-timed dodging and countering his polarity, and he shouldn’t be too much of a hassle.

Cowboy Bebop Anime Will Be Available On Netflix This Month

Demon Slayer: The Hinokami Chronicles Every Ultimate Art So…