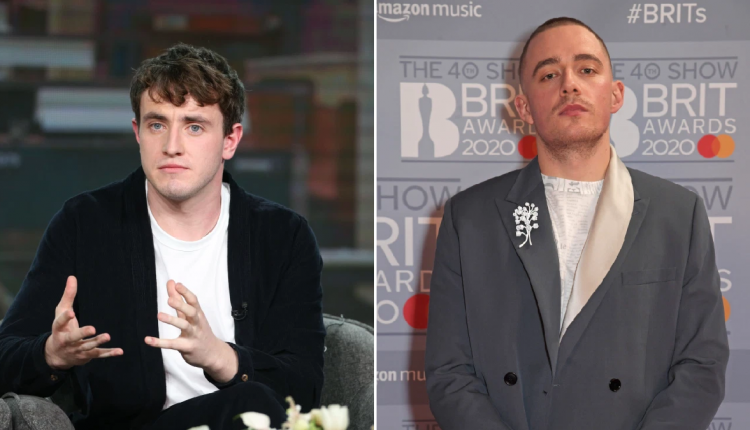 The collaboration was arranged after his chart-topping countryman Dermot Kennedy took the Normal People heartthrob under his showbiz wing.

Paul will read the spoken word sections between Dermot’s songs at a livestreamed gig, called Some Summer Night, from London’s Natural History Museum.

Speaking to Guilty Pleasures ahead of their double act, the Outnumbered singer explained: ‘A while back I messaged Paul. His show had blown up. Ireland is small so I thought it was important for us to watch out for each other.

‘I messaged him to say despite how crazy it has been, I hope he is enjoying it and being in that moment instead of being swept up in it. Then the idea for the show came about and he said yes.’

With Paul a would-be singer himself on Instagram, Dermot, 28, is open to joining forces again with the showbiz world’s man of the moment.

‘Who knows? I love the idea of Irish creatives looking out for each other and collaborating,’ he added, joking it would be nice to see Paul with his clothes on following Normal People’s headline-hitting sex scenes.

As for Paul, he hopes his sex symbol status is just a flash in the pan. Nominated as leading actor in a limited series at this week’s Emmy announcement, the 24-year-old said of being lusted after: ‘I don’t think it’s particularly useful… it’s not permanent, it’s a temporary thing.’

And, having captured the attention of A-lister Hugh Jackman, Paul said it was a ‘struggle to comprehend’ his new legion of fans.

‘Hugh Jackman reached out and I’m a massive, superfan of him,’ he added. ‘He sent the most gorgeous email and now I’m pinching myself that I’m nominated in the same category as him. It feels surreal.’

McFly are coming back as the ‘daddy and mummy’ of pop rock after ten years away… and they have armed themselves with some crude dad jokes.

The All About You singers admit they feared the fans who propelled them to seven chart-topping hits had forgotten all about them.

Gearing up to release their first studio album since Above The Noise in 2010, it is also the first since Tom Fletcher, 35, and 34-year-olds Harry Judd and Danny Jones became fathers.

‘I will always be the daddy!’ Harry told Guilty Pleasures as he reminisced about joining Tom and Danny in 2002.

‘Danny and Tom had a nice set-up before I joined. And then Dougie came along as an innocent 15-year-old, ripe for the plucking. That’s P, L! P-L-ucking!’ he laughed.

He went on: ‘Tom is probably the mum of the group. In my family, the mum is in charge.’

McFly announced this week that their album, Young Dumb Thrills, will be unleashed in November.

But bassist Dougie Poynter, 32, revealed the record almost had an eyebrow-raising alternative title.

‘The other contender was Bum Thrills,’ he said. ‘But it didn’t sit too well.’

While McFly released a collection of demos last year, called The Lost Songs, and formed the megaband McBusted in 2013, they admit they were afraid their fans had abandoned them.

‘You always feel nervous and insecure,’ Harry confessed. However, the lads’ spirits were boosted when tickets for their comeback gig in London last November were a sellout.

‘When the O2 sold out in minutes, it was like, “Okay!” You switch quickly into cocky mode,’ he added.

McFly’s single, Happiness, is finally released today after being delayed by the pandemic, with the band describing it as having ‘a festival vibe’.

Danny said: ‘We had the song ready, then Covid happened.’

And Harry chipped in: ‘It was not the right tone at that time, but now it seems more relevant.’

Bugs unfunny! Kate is not amused by a rabbit surprise

Kate Beckinsale had the shock of her life when a mystery admirer sent her a live rabbit among a bed of rose petals.

The potential bunny boiler incident was criticised by Kate, 47, who said it happened on ‘a boiling hot day where it could have been left outside to roast to death’.

The actress, who has spent quarantine in California with boyfriend Goody Grace, 23, reacted on Instagram: ‘Appreciate so much the good wishes but please please don’t send anyone an animal as a present.’

Raye admits she lost her faith in her pop career until megastar pal Beyoncé breathed fresh life into it.

The Londoner was feeling disillusioned by the time Queen Bey chose one of her songs, Bigger, for her Lion King album.

‘Beyoncé came up to me on the red carpet saying she loved my voice and my song was going to be track one,’ said Raye, who went on to dine with Beyoncé and Jay-Z in London.

She added that 2019 had been ‘a tough year in terms of music progression, so that gave me the affirmation I needed’.

Following the Halo singer’s boost to her confidence, Raye has bounced back into the top ten this summer with her new track, Secrets.

‘People don’t see everything behind the scenes and the hard work you have to put in,’ said the 22-year-old from Tooting, who now wants to pass on Bey’s kindness by supporting other women in music.

Sizzling in a flamenco leotard for 1883 mag, Raye vowed: ‘I love championing other women. Women are killing it behind the scenes, but there’s still not enough of them.’

Why Emily hopes for a good reception at iconic Abbey Road

Music newcomer Emily Burns will finally get to play at the famed Abbey Road Studios — after years of working there as a receptionist.

Emily, 25, would sit and dream as she buzzed in the recording stars.

Now she gets to perform there herself after landing a deal with Island Records.

Set to play her EP I Love You, You’re the Worst tonight, in aid of LGBTQ+ homeless charity AKT, she told GP: ‘I spent so many years showing artists to the studios, so it’s surreal to be heading back to Abbey Road and performing a live show. If I could have told myself then what I’d be doing now, I wouldn’t believe it.’

Emily fondly remembers meeting Paolo Nutini there one night: ‘He and I got talking and he came to a production suite to listen to some of my stuff. To play him my songs was unforgettable.’

How Maya escaped a spiral of drugs, jail and murder

Maya Jama has been talking about how she managed to escape a life of prison, murder and drug-taking. Now one of TV’s hottest properties, she says she refused to let a crime-laden childhood sink her dreams.

‘I was three years old when my dad went to prison and then he was in and out through the rest of my life,’ said the 25-year-old.

‘Then when I was 16, my boyfriend was murdered. I moved to London and had to live with a family member, but they were on drugs.’ Appearing in Heads Up’s #SoundOfSupport mental health initiative, Maya says she is living proof that things can quickly change if you talk about your problems.

She explained: ‘It was just like a spiral of events that should have completely knocked me off track. For a while I used to be embarrassed talking about it.‘

But then as I got older, I realised — there’s going to be so many people who have gone through similar things — once you see somebody having that conversation it’s like, “Ah okay, it’s not that bad, I can do that”.’


MORE : David Schwimmer shares update on Friends reunion special: ‘There are going to be some surprises’