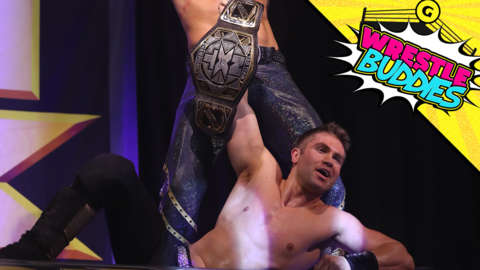 This week on Wrestle Buddies, GameSpot’s professional wrestling podcast, Chris E. Hayner and Mat Elfring have a new video game to obsess over. WWE 2K Battlegrounds is trying to make us forget about the debacle that was WWE 2K20. We also welcome one half of the NXT Tag Team Champions to the show for a wide-ranging discussion.

After spending a few days playing the new WWE 2K Battlegrounds game, Mat and Chris have some thoughts to share about the latest title from 2K. It’s far from a perfect game but is the closest WWE has come to its own version of Super Smash Bros. However, we have many thoughts on how it should be improved with post-release content.

Then, Tyler Breeze, otherwise known as one half of NXT Tag Team Champions Breezango–and the reigning Left Right Left Right Champion–joins us to talk wrestling, winning his first championship, the ridiculous costumes he and Fandango wear, and getting to be part of Xavier Woods’ Up Up Down Down gaming channel. It just so happens that Breeze is one of Chris and Mat’s favorite wrestlers on any current roster, so this ended up being an interview you’re not going to want to miss.

All that plus we answer your questions! New episodes of Wrestle Buddies are released every Thursday on the podcast platform or app of your choice, including Spotify, Stitcher, and Apple Podcasts.