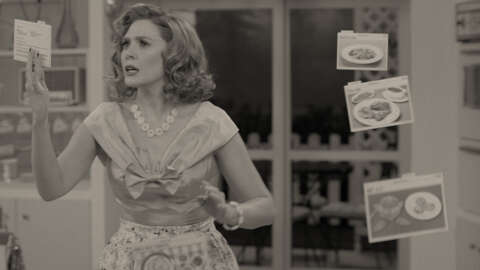 The time has nearly arrived. In mere days, the first Marvel Studios project in over a year will be released when the first two episodes of premiere on Disney+. This isn’t your run of the mill MCU movie or TV show, though. As the first entry in , it’s setting aside Marvel’s traditional comic book style to instead pay tribute to the great sitcoms throughout TV history.

From classic sitcoms , all the way through The Brady Bunch and even , WandaVision goes out of its way to recreate the style of those iconic TV shows as closely as possible–right down to the visual effects.

Of course, one of the things the MCU is most synonymous with is cutting-edge visual effects, which attempt to make the extraordinary seem commonplace–be it men in robot suits fighting men exposed to radiation that makes them gigantic or massive purple alien monsters snapping humanity out of existence on a whim. Those don’t exactly fit in with the ’50s sitcom aesthetic, though. In those shows, nearly all special effects were smaller in scale and done practically, for better or worse.

For WandaVision director Matt Shakman, there was only one way to stay true to the show’s conceit: to do visual effects the way they used to be done in sitcoms. “I love the practical effects for I Dream of Jeannie and Bewitched,” he told GameSpot. “They’re so charming and I think we knew right from the get-go that we should really embrace that.”

Whether it was hanging things on fishing wire to make them appear to float or using some of the most basic animated effects to show off Wanda’s (Elizabeth Olsen) powers, it was no easy task to recreate things practically as they would have been done originally. In fact, the process left Shakman even more impressed by what visual effects artists were able to do back then without the tools used today.

“It’s like marionettes and puppeteering,” he explained. “[We’re] trying to capture that spirit and do what they did on that show. They did an amazing job on Bewitched and I Dream of Jeannie doing what they did. It’s hard, I know, to do what they did. Even now, with all of our tools, It’s hard. So hats off to them.”

While it might seem strange that such simple effects would be difficult to pull off given what’s possible now, keep in mind that doing the effects as practically as possible leaves room for things to go wrong or look bad–especially if you don’t have the right person leading the special effects team. Luckily for Shakman, he had special effects supervisor Dan Sudick, who’s worked on practically every MCU movie thus far, leading his team.

“I went to my special effects maestro Dan Sudick, who does all the big movies and is amazing at blowing everything up and building these fantastic spaceships and stuff,” the director remembered. “I was like, ‘Hey, Dan. So I think I just want to put everything on a wire.’ I was ready for him to be like, ‘What are you talking about?’ and laughing me out of the room.”

That’s not what happened, though. As Shakman recalled, “Dan said, ‘You know, I came up under the guys who did Bewitched and I Dream of Jeannie, I used to do this stuff.’ So for him, it was like finding an old vintage musical instrument that nobody remembered how to play, bringing it back and tuning it.”

Beyond revisiting his own past, though, Sudick was able to pass on this vintage style of special effects to a new generation. “He was teaching all his guys how to do it and it’s an art form,” Shakman remembered.

Now, with that training under their belt, perhaps they should put those new skills to work for another vintage-style MCU show. Dare we say, it’s time for the Steve and Peggy variety hour set in the ’50s. After all, we have got to get Chris Evans back in the MCU somehow, right? Why not make him sing and dance in black and white?

What Is DLSS And Should You Use It?

The Mandalorian Season 2 Episode 5: Easter Eggs & Things You Missed from…

Croods: A New Age Had A Pretty Good Opening Weekend By 2020…