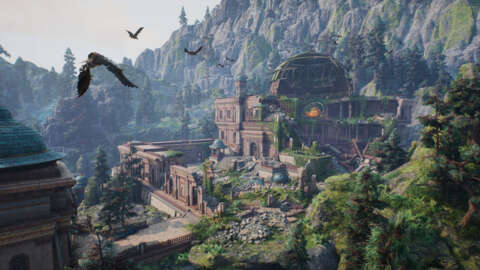 1999’s Outcast was a beloved adventure game that won praise from critics and fans–we named it out 1999 adventure game of the year. Developer Infogrames tried to make a sequel, but the studio went bankrupt and nothing ever came from it. THQ Nordic later acquired the rights and today at the company’s 10th anniversary event, announced Outcast 2: A New Beginning.

The original game was praised for its open-world, non-linear structure, and the sequel takes these elements and expands on them for a modern audience. For those new to the series, the original Outcast put you into the boots of an ex-Marine tough guy Cutter Slade who was sent to a planet, Adelpha, in a parallel dimension to stop a black hole from destroying the world.

The sequel picks up right where the first game left off. Something goes wrong on Cutter’s trip back to his home planet and so he gets stuck for 20 years. He wakes up not back home on Earth, but still on Adelpha, instead. The people of Adelpha have been enslaved, and Cutter must save them. The game aims to separate itself from the pack with a “self-ironic, wholesome” take on sci-fi stories. There are so many dark and gritty sci-fi games on the market, the studio said, so it wanted to go in a different direction and make a game that was both more colorful in terms of its art and its tone. The developers want to make a world where players feel at home.

Outcast 2 is in development at Belgian outfit Appeal Studios, and the original Outcast’s game director, art director, and composer have returned. In total, about 10 people who worked on the original game are coming back for the sequel, which aims to be bigger, better, and more realized in every way for the new century compared to the first game

It’s still early days and a lot of the features and systems remain under wraps, but THQ said players can use a new jetpack ability and take advantage of a modular weapon system. In addition to shooting mechanics, the game will use magic in some fashion, too.

Outcast 2 does not have a release date yet, but THQ confirmed it’s coming to PlayStation 5, Xbox Series X|S, and PC, noting that development began in late 2018. The game, which is single-player only, runs on the Unreal Engine 4. It is almost in an alpha state, the studio said.