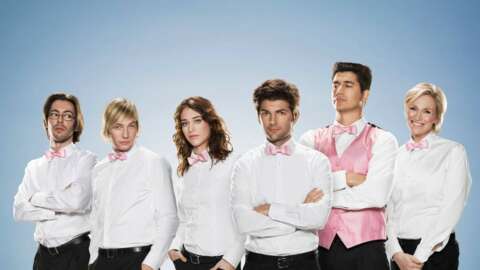 The short-lived but warmly received sitcom Party Down, about caterers in Hollywood waiting for their big breaks, will be getting a revival according to Deadline. Party Down ran for two seasons spanning 20 episodes on Starz in 2009 and 2010, and the network is currently working on bringing the series back for an unspecified amount of episodes.

It’s also not yet clear who of the original cast will return, which in 2021 is an interesting aspect for Party Down to navigate since the series losing both Jane Lynch to Glee and Adam Scott to Parks was believed to be major contributors to the show coming to an end in 2010. In addition to Lynch and Scott, Party Down also starred Ken Marino (Wet Hot American Summer), Martin Starr (Silicon Valley), Ryan Hansen (Veronica Mars), Lizzy Caplan (Freaks and Geeks), and Megan Mullally (Childrens Hospital).

What is clear is the original team of co-creators–Rob Thomas (Veronica Mars), John Enbom (Terminator: The Sarah Connor Chronicles), Paul Rudd (Ant-Man), and Dan Etheridge (iZombie)–are all back and are currently developing the revival.

“At the end of 2019, the Party Down cast and producers were all reunited at a retrospective for the show hosted by Vulture,” said Thomas in a statement (via Deadline). “We had such a good time that we wanted to find a way to get the team back together again. The cast is so busy these days that finding a window where we can do it may require trigonometry, but we’re determined to make it happen.”