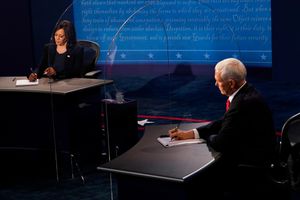 This story is part of Elections 2020, CNET’s coverage of the run-up to voting in November.

Vice President Mike Pence and California Sen. Kamala Harris sparred on Wednesday night over the Trump administration’s response to the coronavirus, as the pandemic took on a new level of urgency after the president contracted the disease.

Harris, who is Democratic presidential nominee Joe Biden’s running mate, assailed the administration’s response to COVID-19, the disease caused by the virus and responsible for the deaths of 211,000 Americans. During a debate in Salt Lake City, she said the administration’s response, which is led by Pence, minimized the seriousness of the pandemic.

Subscribe to the CNET Now newsletter for our editors’ picks of the most important stories of the day.

“The American people have witnessed what is the greatest failure of any presidential administration in the history of our country,” said Harris, the first Black woman and Asian American woman on a major party ticket. If elected, a Biden administration would have a national strategy for contact tracing, for testing and for providing a vaccine at no cost, she said.

Pence dismissed Harris’ charge, defending the White House response as “the greatest national mobilization since World War II.” He added that under President Donald Trump, the country was on track to produce a vaccine in record time.

The tense exchange came as the country already faced the unprecedented drama of Trump testing positive for COVID-19 last week. Pence has tested negative, though many people within the president’s orbit have contracted the disease. The debate came less than a month before the Nov. 3 presidential election.

Debate organizers took extra precaution, seating Pence and Harris roughly 12 feet apart and separating them with plexiglass barriers. Even the question of plexiglass became an issue in the days before the debate, as Pence initially opposed having a barrier near him. Pence eventually agreed to the precaution.

The US response to the coronavirus dominated the 90-minute debate, which avoided the chaos of a widely panned meeting between Trump and Biden last month.

The two candidates also clashed over climate change. Harris brought up the wildfires raging on the West Coast, including her home state of California. Pence defended the Trump administration’s decision to pull out of the Paris Accord, a pact that tech executives, including Apple’s Tim Cook, Tesla’s Elon Musk and Microsoft’s Satya Nadella have supported.