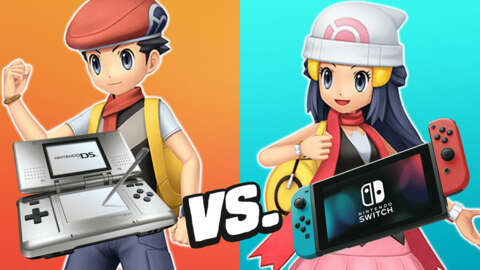 Pokemon Brilliant Diamond & Shining Pearl have officially been revealed! To celebrate we go back and compare the newly revealed footage in the trailers to the original Diamond & Pearl gameplay in this side by side comparison video!

Pokemon Diamond and Pearl are almost 15 years old, having originally launched for Nintendo DS in September 2006 in Japan. The games were released four years after the previous entry, Pokemon Ruby & Sapphire, and we wouldn’t get the next generation, Pokemon Black and White, for another four years. Instead, we indulged in some Pokemon nostalgia with games like Pokemon HeartGold & Soulsilver–so it wasn’t completely empty.

Now, Nintendo and The Pokemon Company are inviting us to take a trip down memory lane again with Pokemon Brilliant Diamond and Shining Pearl, which are remakes of the classic DS titles. This gives us the perfect excuse to put both versions of the two games side-by-side to see just how far we’ve come.

As you might have guessed the DS and Switch versions don’t look similar at all. The Switch version went with a chibi art-style the harcons back to the little sprites on the DS, but otherwise everything is shiny and new including the battles between Pokemon.