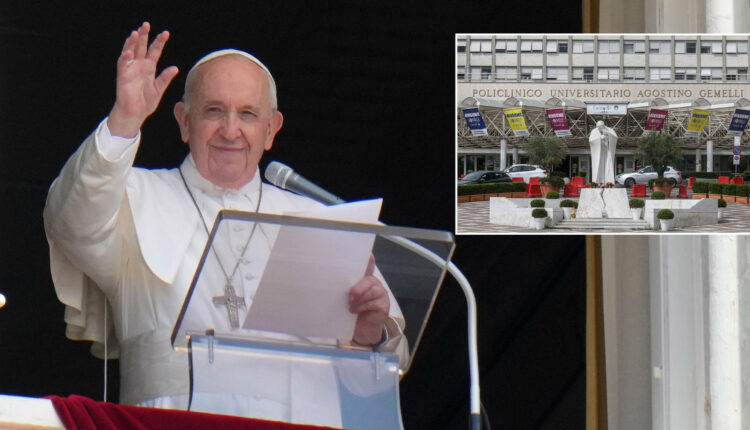 Pope Francis is recovering well after undergoing surgery to treat a colon problem at hospital in Rome, the Vatican has said.

The 84-year-old was said to be ‘in good condition, alert and breathing on his own’ a day after the three-hour operation which involved removing half his colon.

It is the first time the pope has been admitted to hospital since his election in 2013.

During his weekly Angelus address, he asked the faithful for their prayers, saying: ‘I ask you to pray for the pope, pray in a special way. The pope needs your prayers.’

The sprawling Catholic-run hospital and medical school in the northern part of Rome traditionally treats popes and a part of its 10th floor is permanently reserved for them.

The Holy See said Francis was treated for a diverticular stenosis, a disease which involves bulges in the wall of the large intestine that can lead to a narrowing of the colon.

In addition to causing pain, the condition, which is more common in older people, can lead to bloating, inflammation, and difficulty in bowel movement.

Mr Bruni said in a written statement: ‘His Holy Father is in good, general condition, alert and breathing spontaneously.

‘The operation for the diverticular stenosis, performed during the evening of July 4, involved a left hemicolectomy and lasted for about three hours.’

The procedure entails removing the left side of the colon and attaching the remaining parts of the large intestine.

Earlier, an Italian cardinal told reporters he had been informed that Francis was doing ‘well’ after the operation.

Cardinal Enrico Feroci said he had spoken with Cardinal Angelo De Donatis, who serves as vicar of the Rome diocese, ‘and he told me that the pope is well’.

He added: ‘Our prayer and closeness are very great.’

Francis, who was born in Buenos Aires in 1936, is sometimes short of breath after having had part of his right lung removed at the age of 21 following a life-threatening bout with pneumonia.

He also receives regular physiotherapy for sciatica, which causes pain that radiates from the lower back to the legs.

The condition forced him to miss several events at the beginning of this year and has led him on occasions to walk with difficulty.