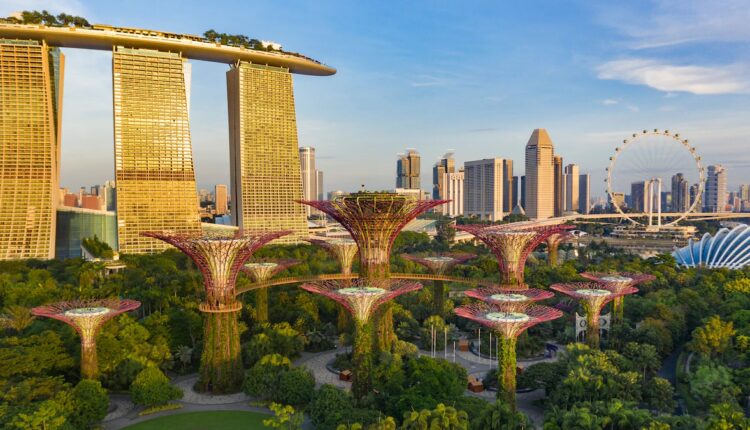 Possible climate futures–from the optimistic to the strange

The UN’s latest report on the state of the climate offers a stark warning that humanity’s future could be filled with apocalyptic natural disasters. But that future isn’t set in stone. Depending on global economic trends, technological progress, geopolitical developments, and most important, how aggressively we act to reduce carbon emissions, the world at the end of the 21st century could turn out to be radically different. Or not.

The spectrum of possible futures that await us underpin the projections of the Intergovernmental Panel on Climate Change’s (IPCC) Sixth Assessment Report, whose first chapter on the physical science of climate change was released last week. The new report features five climate narratives that differ in terms of the level of projected warming and society’s ability to adapt to the changes ahead. Each narrative pairs a different socioeconomic development scenario with a different carbon emissions pathway, resulting in a Choose Your Own Adventure-style series of endings to the story of 21st-century climate change.

In some of those endings, humanity rises to the climate challenge while making concurrent efforts to reduce poverty and improve quality of life for everyone. The world is hotter and the weather is more dangerous, but the worst climate impacts are averted and societies are able to adapt.

In others, global cooperation is fractured by nationalism, increases in poverty, soaring emissions, and unimaginably hot weather.

In the IPCC report released last week, the different emissions levels of the various scenarios drive different levels of warming in climate models, resulting in a range of physical impacts on the planet. The implications of the different socioeconomic storylines will come into play more in the second and third chapters of the new IPCC report, slated for release in 2022, since these chapters focus on climate adaptation and mitigation, says University of Arizona climate scientist and IPCC co-author Jessica Tierney.

“Adaptation depends heavily on these narratives of ‘is the world cooperative, are wealthy countries helping less wealthy countries?’” Tierney says. “Mitigation also relies on these scenarios, because they represent different attitudes toward technological advancement. So I’m really looking forward to those reports.”

Based on current trends in global energy use and recent climate policy, some of the IPCC’s futures appear to be more likely than others. But the report’s authors chose to present a wide range of storylines to help policymakers and the public understand the choices in front of us—and what’s at stake if we don’t choose wisely.

The anatomy of a climate scenario

For the IPCC’s Fifth Assessment Report, released in 2013 and 2014, modelers used a series of “representative concentration pathways,” or RCPs, to project our climate future. The RCP scenarios differ based on the amount of effort humanity puts into limiting climate change, ranging from the high-mitigation, low-emissions RCP-2.6 scenario to the no-mitigation, high-emissions RCP-8.5 scenario. The number following each scenario indicates “radiative forcing,” or how much extra energy our emissions add to the Earth system, measured in watts per square meter, by 2100. When Earth receives more energy via radiative forcing, temperatures rise.

The scenarios underpinning the Sixth Assessment Report contain additional human elements that make them a bit more complex to decode. Like the RCPs, each includes an emissions pathway represented by end-of-century radiative forcing—in this case, ranging from a best case of 1.9 watts per square meter to a sci-fi disaster movie-like 8.5 watts per square meter.

The 1.9 scenario, which limits global warming to below 2.7 degrees Fahrenheit (1.5 degrees Celsius), was added to the latest IPCC report as a direct result of nations adopting a 1.5°C global warming target in the Paris Agreement, according to Zeke Hausfather, who directs climate and energy at The Breakthrough Institute, an environmental research center focused on technological solutions. Like its predecessor, the Sixth Assessment also includes 2.6 and 4.5 watts per square meter radiative forcing scenarios, as well as a high-end scenario of 7 watts per square meter.

The biggest change in the new report is that these emissions pathways don’t stand alone. Each of them is paired with a “shared socioeconomic pathway” (SSP): a 21st century global development scenario that includes projections of population and economic growth, as well as technological and geopolitical trends—all of which can affect both emissions and our ability to reduce them and adapt to the climate change they create. Each of the SSP scenarios can be paired with multiple emissions pathways, resulting in many potential storylines.

The good, the bad, and the weird

Both of the optimistic storylines are consistent with the Paris Agreement goal of keeping global warming below 3.6°F (2°C). In these futures, nations act immediately and aggressively to reduce their fossil fuel use. Global emissions reach net zero in the middle to late 21st century before dipping into the negative as humanity starts capturing huge amounts of carbon dioxide out of the air, using technology that has yet to be proved at large scale. By the end of the century, Earth has warmed by approximately 2.5°F (1.4°C) in the first optimistic scenario and 3.2°F (1.8°C) in the second, with the differences related to the speed of emissions reductions and the rate at which we deploy carbon capture technology..

While this amount of warming increases the frequency and severity of extreme weather and results in up to two feet of sea level rise, more severe climate impacts are avoided. At the same time, in each of these optimistic scenarios, strong economic growth, along with broad investments in education and healthcare, raise standards of living globally. The world is both richer and more equal by the end of the 21st century, and societies have an easier time adapting to the changed climate than they might have with less global cooperation and resource sharing.

The middle-of-the-road scenario is somewhat less rosy. In it, carbon emissions remain high until the middle of the century before starting to decline. By the end of the 21st century, the world has warmed by around 4.9°F (2.7°C). Hausfather says this scenario is “roughly consistent” with nations’ 2030 climate pledges under the Paris Agreement, meaning it’s the future we’re on track for if the world fails to adopt more aggressive emissions reductions measures.

It is also the future that most closely matches historic patterns of socioeconomic development. The middling storyline envisions uneven global economic growth, with some countries marching toward greater wealth and social equality and others falling behind. Fertility rates remain high in the developing world, and the global population peaks toward the end of the century at around 9.5 billion. At that time many parts of the world remain vulnerable to severe climate impacts.

In the IPCC’s dark future, global cooperation collapses as nationalism takes a strong hold on countries. Economic growth and social progress stall. Among the world’s many impoverished nations, birth rates remain high, causing the global population to rise to over 12 billion by century’s end from nearly 8 billion now. Carbon emissions continue to rise throughout the century as well, causing global temperatures to reach a sizzling 6.5°F (3.6°C) above pre-industrial levels by 2100. Droughts and floods worsen considerably, summertime Arctic sea ice vanishes, and what were once 50-year heat waves occur nearly 40 times more often.

Finally, there’s the strange, almost science fictional scenario. In this world, humanity doesn’t just fail to reverse its emissions curve, it doubles down on fossil fuel extraction and energy-intensive lifestyles. As nations dig up and burn more and more coal throughout the century, the world warms by an unimaginable 7.9°F (4.4°C), hotter than it has been in millions of years.

Yet in that scenario, a strong push for global economic and social development means the benefits of fossil fuels are spread everywhere, leading to societies that Hausfather describes as “very rich, very equal, and very high tech” by century’s end. Earth is hellishly hot, but humans might be better equipped to adapt than they would be in the poor, highly unequal world beset by nationalism.

The weird future may be an interesting thought experiment, but a world in which humanity burns more coal this century than exists in known reserves seems highly unlikely, especially given the way both  market forces and climate policy are now driving a decline in coal use in wealthy nations. (Coal now accounts for less than 20 percent of all U.S. electricity generation, down from nearly 50 percent in 2007).

The IPCC acknowledges as much in its latest report. But it chose to include this scenario anyway partly out of a desire for continuity with the last report—SSP5-8.5 is broadly similar to the previous assessment’s RCP8.5—and partly because scientists studying the impacts of global warming often find it “useful to hit the climate with a big hammer,” Hausfather says.

It is also possible that feedbacks within the climate system, such as a massive pulse of CO2 and methane from thawing permafrost, will push warming levels toward those worst-case projections even without a sudden coal industry revival. The same thing could happen if the climate proves more sensitive to human-caused carbon dioxide emissions than scientists currently expect.

“From the perspective of the IPCC, you need to look at the highest-end possibility,” Tierney says. “If you only ran scenarios you thought were most likely, you just don’t know the range of outcomes.”

The optimistic scenario that limits warming to less than 1.5°C also seems relatively unlikely considering the slow pace of climate action to date. But that could change.

Hausfather notes that nations representing approximately two-thirds of global emissions have now committed to zeroing out their emissions by the middle of the century. If these countries are able to make good on their pledges, and if other developing nations follow suit—big ifs, of course—“it does put warming outcomes between 1.5 and 2 [degrees] very much on the table.”

“We can still choose to go down the better pathway,” Hausfather says.