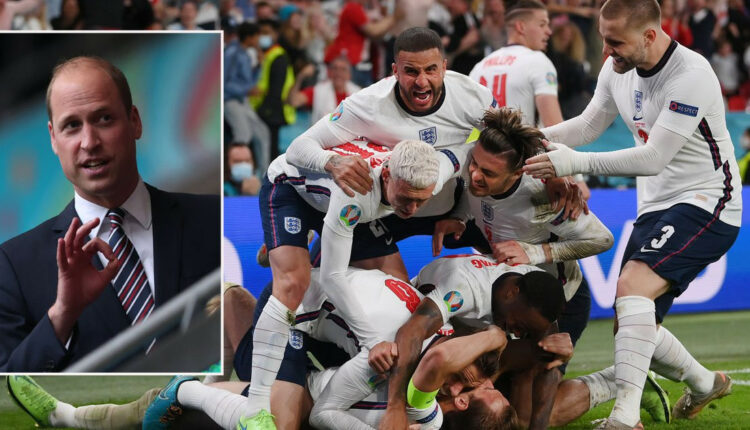 Prince William has urged Gareth Southgate and his squad to ‘bring it home’ as England go for glory in the Euro 2020 final.

The Duke of Cambridge wished the players, including captain Harry Kane, the ‘very best of luck’ for their clash against Italy tonight.

William, who is president of the Football Association, said the Three Lions had brought out the ‘very best of England’.

And he paid tribute to every member of the England side, on and off the pitch, for ‘playing their part’.

The Duke, 39, could not disguise his excitement ahead of the showdown at Wembley Stadium.

William, who will be joining 65,000 fans at Wembley for the big game, told the squad: ‘Gareth (Southgate), Harry (Kane), and to every member of the England team on and off the pitch, I just want to wish you the very best of luck for tonight.

‘What a team performance it’s been. Every member of the squad has played their part, and all the back room team as well have been truly essential.

‘I can’t really believe this is happening. So exciting and I just wish you the very best of luck.

‘You bring out the very best of England and we are all behind you. The whole country is behind you. So, bring it home.’

Prince William’s video message has been posted to the Duke and Duchess of Cambridge’s official social media channels, including their Twitter account, @KensingtonRoyal.

It comes as the Queen also wished the England team good luck yesterday.

The monarch sent a personal message to Gareth Southgate, paying tribute to the squad’s ‘spirit, commitment and pride’ ahead of the final.

In a short note, she also recalled the moment she presented the trophy to Sir Bobby Moore after they won the World Cup in 1966.

‘Fifty-five years ago I was fortunate to present the World Cup to Bobby Moore and saw what it meant to the players, management and support staff to reach and win the final of a major international football tournament.

‘I want to send my congratulations and that of my family to you all on reaching the final of the European Championships, and send my good wishes for tomorrow with the hope that history will record not only your success but also the spirit, commitment and pride with which you have conducted yourselves.’

Prince Charles has also backed England to win – but will be supporting the game at home, revealing how watching the squad is ‘not good for the nerves’.