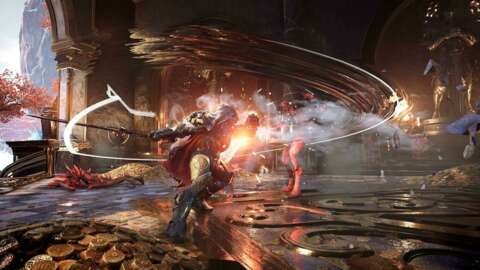 During its E3 2021 presentation, Gearbox Software announced that its looter-slasher Godfall will hit PS4 on August 10 after originally being exclusive to PS5 and PC.

Godfall’s PS4 release also comes with a free update called Lightbringer. This piece of content adds an endgame mode to the looter-slasher that offers over 40+ pieces of new gear and skills. Additionally, the PS4 release ships alongside Godfall’s Fire and Darkness expansion, which takes you to some fire realm to fight bosses and acquire, you guessed it, even more loot.

Gearbox also announced that matchmaking is coming to Godfall soon and that PS4 players will be able to upgrade to PS5 at no additional charge.

In case you don’t remember, Godfall is Gearbox’s looter-slasher that launched on PC and PlayStation 5 back in November 2020. It was one of the few PS5 exclusive games that showed the system’s graphical prowess. We scored the game a 5/10 in our Godfall review, calling it “a shallow game bolstered by decent combat that struggles to bear the weight of an entire game.”

Norris: Fending off Perez for Monaco podium was “stressful”