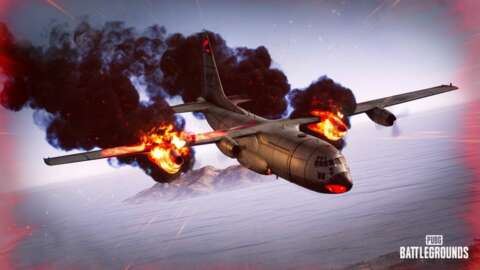 After a maintenance period that ran long due to technical difficulties, the PC version of PlayerUnknown’s Battlegrounds is back up with a brand new update. The new content includes updates to two of the game’s maps, as well as the potential to experience an exciting new crash landing scenario at the beginning of the game.

[PC] Maintenance is complete and Update 13.1 is now Live!

Drop-in and experience updates and additions to our latest map Taego, changes to weapon balance, map rotation changes, and more.

Update 13.1’s biggest shakeup is the “emergency landing” scenario for the Taego map, where the plane that drops players on the battleground has the potential to experience an engine failure, catch fire, and hurtle towards the ground. Players can bail from the burning plane whenever they want, with earlier jumps giving the option to travel further at the start. If players decide not to jump from the crashing plane, they’ll begin the match with 50% damage.

Taego has another new addition in the form of a secret loot room that requires a special key to unlock, granting lucky players access to some of the best loot in the game. Classic map Sanhok has also been updated, with the new patch adding more areas of cover on the northwest island’s shoreline and temple.

The normal match rotation has been updated, with Paramo rotated out and Karakin now added to the rotation–however players on Twitter who were looking forward to playing in Karakin have complained that it’s currently showing up too rarely in the rotation.

For the full details on what’s been added in update 13.1, check out the full patch notes here. The update is due to arrive for consoles a little later on August 12.