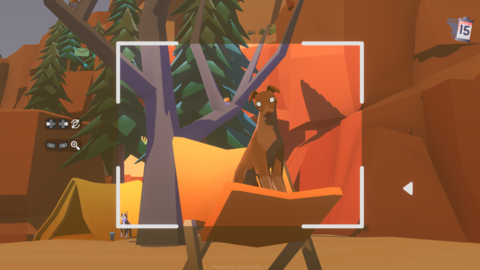 Pupperazzi is a cute game filled with all the same affection that we have for our four-legged friends, but sadly it doesn’t deliver the warm fuzzy feelings you might be expecting.

Dogs are one of the few remaining precious things in life. Dogs are good–providing the world with ceaselessly comforting and fiercely loyal companions. Truth be told, we’ve reached a point where not liking dogs just feels a bit, well, wrong–like admitting you hate sweets or can’t stand the feeling of a freshly made bed. Or, more relevantly, that you just weren’t a fan of the cute n’ cozy indie game you had hoped you would love.

Sundae Month’s Pupperazzi is, conceptually, adorable. Set in a world almost entirely inhabited by playful pooches, the first-person photography game perfectly aligns with a growing desire for more peaceful experiences, making it ideal for those looking for cozy games. However, all these warm fuzzy feelings and vibrant world aren’t enough to make up for Pupperazzi’s frustrating lack of variety when it comes to things to do, which ultimately leads to a repetitive gameplay loop.

In Pupperazzi, you play a living camera, equipped with stringy limbs and hands perfectly crafted for giving pets and throwing frisbees. Your photo-filled adventure begins in a small cove beside a lighthouse, where an endearing “sea dog” clad in a yellow fisherman’s jacket greets you with a simple request: Take a picture of him.

Accomplishing this task, and interacting with the world in general, is fairly straightforward. In Pupperazzi, you remain in first-person as you scout locations and as you ready your camera to take photos of all the game’s rambunctious pups. While walking around, you have the options to crouch, jump, pull out your camera, and extend your spaghetti-like limbs to interact with both dogs and random objects. In your menu, you can adjust what lens and film you are using, allowing you to take plenty of fish-eye photos in “far out” colors, super-cute selfies, and even some somber black-and-white portraits.

After taking your first photo and submitting it to the scruffy sailor for review, the rest of the game starts to unfold as you fulfill photo requests to earn golden bones–the currency used to purchase new film, lenses, and camera upgrades that help elevate your photography to new heights. You can also find a handful of these bones hidden around the game’s quirky and colorful locales, a small incentive to traverse Pupperazzi’s various boardwalks, red rocks, and city blocks. Ultimately, acquiring bones and making these purchases doesn’t just serve as a means to enhance your artistry; it also helps you accomplish more complex requests which, in turn, unlock different areas of the game.

While the seaside cove you begin in is a bit small, housing only 20 or so tail-wagging beach bums, subsequent levels are a bit larger and more intricate, offering up plenty of room for even more pups and photo-worthy moments that are well worth capturing–even if they don’t meet the criteria required to fulfill your requests. You see, all your beloved snapshots also serve another purpose in Pupperazzi: making you a social media star. Each picture you take in the game can subsequently be uploaded to Dog Net, Pupperazzi’s in-game social media network where canines from all over the world offer up compliments on your artistic endeavors… until they’ve had enough and call you out for “spamming,” that is.

However, while I found myself positively offended the first time one of the anonymous canines of Dog Net chastised me for my adorable-yet-redundant photography, it didn’t take long for me to share their sentiment, and grow weary of what felt like an even more burdensome kind of “fetch” quest. While Pupperazzi might be conceptually adorable, its combination of cute dogs, quirky environments, and somewhat contrived feeling “cozy vibes” are all polish on an experience that is regrettably surface-level at best and empty at worst.

There’s a very intentional simplicity to Pupperazzi–a conscious effort to shy away from overly gamifying its photography in favor of focusing on self-expression and the simple joy both dogs and creating art brings us. This is clear in both the game’s overall delivery as well as its sole focus on camera upgrades. However, it doesn’t take long for this simplicity to feel a lot more like vacancy than heartfelt minimalism. In veering away from gamifying Pupperazzi’s photography, there’s not much game left.

The way you obtain your tasks is simply by showing up at a new location, going to your menu, and opening a handful of texts instructing you on what type of photo they want. When you share your images on Dog Net, the comments you receive are regurgitated and don’t make you feel as if you’ve captured anything new or noteworthy. While you do have an album that keeps track of every breed of dog you’ve seen and their special actions, it’s not implemented in a way that feels connected to the rest of the game. There’s no incentive to fill the album, and you can’t view it without leaving your current location and going back to the main map.

That said, you’ll find yourself regularly being forced back to the map to refill on film, given that you’re initially limited to 10 shots per location. This loop quickly grows tiresome, and while you can slightly increase your film capacity a bit later in the game, the lack of any mechanics or features that incentivize you to use your film more methodically–or an interesting reason to revisit the world map–makes the limit off-putting as opposed to a thought-provoking consideration.

All this adds up to a lack of immersion or sense that you’re on an extraordinary scavenger hunt of sorts, uncovering unknown secrets about this world overrun by dogs. And without that sense of adventure or a narrative, the game then relies on having compelling exploration and an expressive photo mode. Unfortunately while the world of Pupperazzi is pleasant, navigating it–both freely and from behind your camera–is not. Despite having various settings specifically designed for motion sickness–all of which I enabled–Pupperazzi’s jerky camera and frame rate issues (even on my Xbox Series X) left me feeling nauseous to the point of having a moderate headache each time I played. This was only exacerbated by the game’s repetitive music, as well as controls ill-equipped to meet the demand for light platforming to find each level’s hidden quest.

Weirdly enough, the dogs themselves also felt a bit off at times. Much like the game’s locations, the dogs ultimately felt vacant, as many of them merely sat in position awaiting your camera. The ones that were wandering about, while fun to watch, were a bit strange to interact with. When you pet a dog in Pupperazzi, they are drawn to you in the same way friendly animals in Minecraft are–which is to say they stand so close it makes it impossible for you to take a picture of them unless you run and manage to get the shot before they catch up. When you throw toys at them, oftentimes they run away rather than interact with them in the way you might have hoped. At a certain point in the game, you also earn the ability to dress them up in outfits, though the selection is very limited and fails to inject any liveliness into the game or pups.

Pupperazzi is a cute game conceptually, but it falters in its execution, making for an experience that I couldn’t get behind despite desperately wanting to extend it all the same affection I have for our four-legged friends. Quite simply, the game fails to capture the liveliness and joy that dogs, art, and games can provide us with. While the premise is unique and wholesome, Pupperazzi is ultimately a lot more bark than bite.

Call Of Duty Still On PlayStation, Might Not Be Yearly | GameSpot News