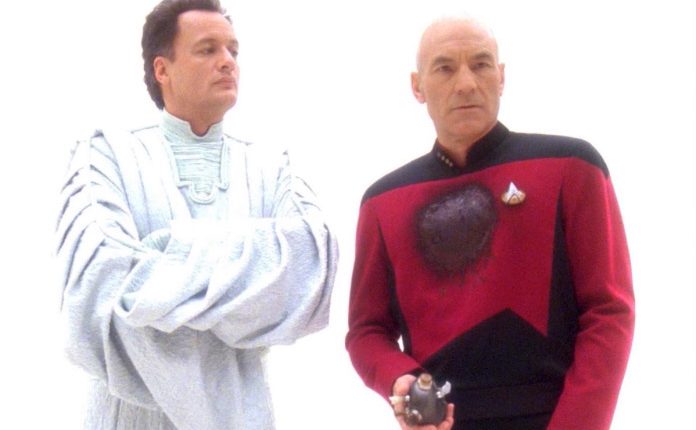 Producers have talked about “Star Trek: Picard” running for three seasons, and reports cropped up a while back that they developed a third season to be shot back-to-back with the second which is currently in production.

Paramount+ has not officially announced a third season, while co-showrunner Akiva Goldsman demurred rather than denied the reports the other week, telling Heat Vision that: “I would love to answer that, but I cannot” when asked directly if the back-to-back season shoot was still happening.

Now though, one of the show’s stars may have given the game away – Q actor himself John de Lancie. TrekMovie.com reports that in videos posted on Cameo in April, de Lance says he is appearing in a total of six episodes and from the sounds of it that run spans two seasons:

“Q is coming back. As a matter of fact, for the last two weeks I have been filming on Picard and really annoying Picard – really annoying him. [laughs] Patrick was delighted to see me for the first couple of days and after a couple of more days of really annoying scenes, he said, ‘SO, how many episodes are you doing?’ In other words, ‘When are you going to get out of my face?’ And the answer is six episodes. I think they are going to be coming out – actually, I don’t know. But we are shooting season two and three all at the same time right now.”

The production is taking strict COVID precautions, de Lancie saying going to the set is “like walking into a surgical suite – we are masked and checked and rechecked.” He also says this Q won’t be kidding around as much as in time’s past – more akin to the serious version of the first two seasons.

The second season of “Star Trek: Picard” will arrive in 2022.