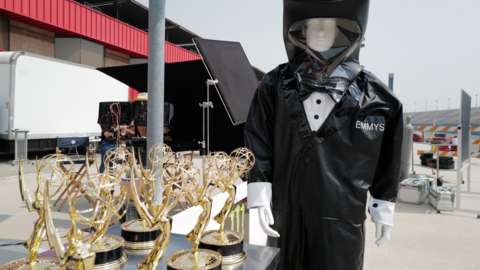 While this year’s Emmy Awards were held remotely to protect the safety of those attending, the producers also decided to have a little fun with it, sending people out to deliver awards in Emmy-branded tuxedo hazmat suits. These suited helpers weren’t just sent to the winners, however–nominees who didn’t take a prize home had to watch their trophy literally walk away.

In a move that seems almost too cruel, some Emmy nominees had to watch fake Emmys being taken away from them after losing to another nominee. A video of this process was shared by Ramy Youssef, after losing in the lead actor in a comedy series category to Schitt’s Creek’s Eugene Levy.

Another video shows the cast of Insecure collected together, watching as another hazmat-suited person walks away with the award they didn’t win.

Other videos from the awards night show people in these same outfits delivering Emmys to their actual winners, including one person who was sent all the way to Canada to deliver an astounding seven trophies to the Schitt’s Creek cast and crew.

With winners scattered across the world, there wasn’t a suited staff member at every Emmy nominee’s house, however–Watchmen’s Emmy-winning writer Damon Lindelof revealed that he believed they had lost the category as he couldn’t see a hazmat-suited person anywhere near his house.

Check out the full list of winners from the 2020 Emmys here.

Freedom Fighters, A Cult Classic From Hitman Dev, Might Be Coming Back