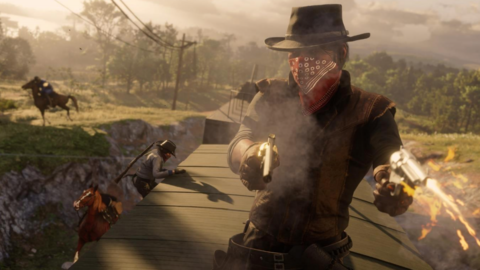 It’s a big day for Red Dead Online, as the multiplayer game’s big Blood Money update is out now across console and PC. As announced previously, Blood Money is focused on seedy enterprises, as players “experience the darker side of frontier America.”

You will take part in robberies, shakedowns, and other “lawless” activities, and you’ll be rewarded for your dastardly deeds. Here’s everything we know about Red Dead Online: Blood Money.

Guido Martelli, the underboss to Angelo Bronte, is seeking to improve his standing in Saint Denis and is recruiting soldiers to conduct crimes for him. Players who complete these crimes will earn Capitale, which is described as a “rare black market commodity.”

The crimes are multi-part missions, and the first three will be available at launch, with three more to come later.

You can visit Sean Macguire, Anthony Foreman, Joe, and James Langton to take on these crimes by yourself or with up to six others from the game’s new Free Roam mission menu.

You can take on Martelli’s contracts across Red Dead Online’s five states to collect this Capitale–and often through brutal, unsavory means. For example, you might have to take down other criminals to claim the Capitale, or you might need to raid camps to steal it. You can also find Capitale in chests and homesteads throughout the game.

You can also claim specific contracts that yield bigger stashes of Capitale, and also earn you the respect of Martelli. If you earn enough respect, you might be invited to take on what are known as Opportunities. These are “larger” schemes dreamed up by Martelli in a bid to take down a political foe by stealing jewels.

The Opportunities have three difficulty levels–Standard, Hard, and Ruthless–and they can be played alone or with up to three others. You need to have enough Capitale to start an Opportunity, and starting one comes at a cost of Capitale, too. However, the rewards may be plentiful, especially if you play at a higher difficulty.

Rockstar also mentioned that, in addition to the mission-specific contracts, there will be randomly triggered events in Red Dead Online that players may stumble upon to earn more Capitale. What’s more, the developer said a big difference with the Blood Money update is that all missions will be available at the onset (after you’ve met Martelli), and you don’t need to purchase a pre-requisite item to get started.

Also of note, Rockstar will sell an optional Hired Gun Kit that comes with Capitale, ammo, consumables, and a bandana, for players looking to get started more quickly.

Introduced in Blood Money, the Quick Draw Club is described as a “series of four distinct rapid-fire passes” that sounds like the game’s take on battle passes.

Each Club is themed around criminal activity to match the tone of Blood Money. Each comes with access to 25 ranks of rewards, for a price of 25 gold bars. You can earn all 25 back if they complete all 25 ranks. Everyone who buys all four Quick Draw Club passes will get the Halloween Pass 2 for free when it’s released.

Here is a rundown of the four parts of The Quick Draw Club.

Rockstar shared a series of images from Red Dead Online’s Blood Money update that show off some of the lawlessness you’ll experience in the update, and some of the characters you’ll meet. Check out the images in the gallery below.

The Blood Money expansion includes the Grammy-nominated blues artist Christone “Kingfish” Ingram as an NPC in the role of a mysterious guitar player. Eagle-eyed fans might have already caught a glimpse of him in the Blood Money announcement trailer.

In addition to Crimes and Opportunities, Red Dead Online: Blood Money adds a series of smaller, welcome quality-of-life improvements to the experience. These include:

Canada’s women’s soccer team is more popular than ever — so where’s the merch?