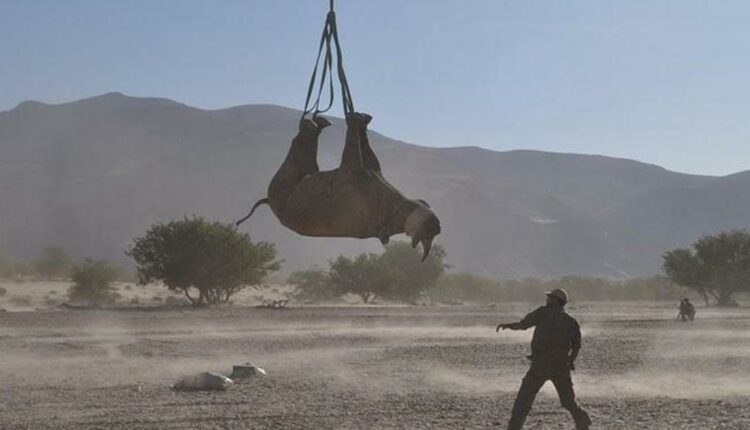 What happens when you hang a rhinoceros upside down? That’s what a group of researchers from Cornell University and Namibia’s Ministry of Environment wanted to find out. So they dangled a dozen tranquilized black rhinos from a crane — and earned an award for their work.

Science humor magazine Improbable Research awarded the study an Ig Nobel — a takeoff on the famed Nobel Prize — for transportation, one of 10 research projects cited Thursday “for achievements that first make people laugh then make them think.”

The study tested how rhinos fare upside down because that’s increasingly how conservationists move the critically endangered animals — suspended from a helicopter with a 130-foot chain while the 1,400-pound mammals are relocated either for their protection or to ensure genetic diversity in breeding efforts. According to the researchers, nobody had ever checked to see if the health of a tranquilized rhino was compromised when being airlifted upside down.

A tranquilized rhino hangs in the air.

Namibian Ministry of the Environment, Forestry, and Tourism

As it turns out, the rhinos coped very well — and better in this unusual position than simply lying on their side or chest. That’s likely good news for conservation efforts, as the number of rhinos has been decimated by poaching, in part from rising demand for rhino horn under the mistaken belief it has medicinal qualities. It’s estimated at least one rhino is killed every day, and only around 5,500 are left.

Other research that earned a 2021 Ig Nobel includes a study that linked the obesity of a country’s politicians to its level of corruption and another that tested whether humans evolved beards to protect themselves from punches to the face.

Biden, Obama and Clinton mark 9/11 in New York with display of unity