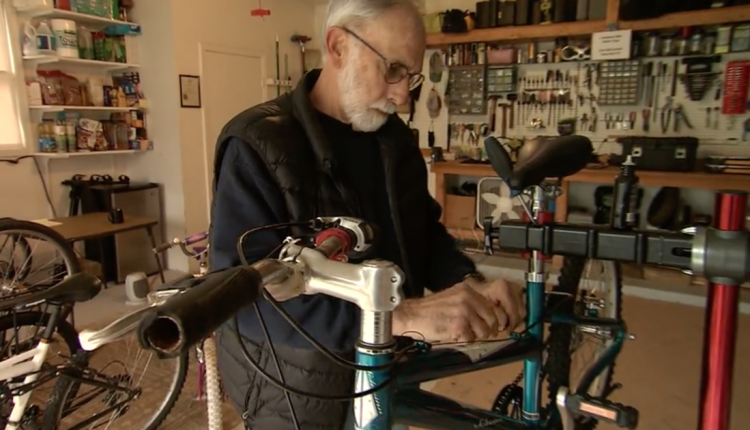 Potomac, Maryland — This past April, Ric Jackson helped a neighbor who was looking for someone to fix the brakes on his daughter’s bicycle.

The avid cyclist and retired mathematician has since fixed more than 650 bikes for friends, neighbors, even strangers.

He charges nothing for this labor of love, but says he gets a lot in return. Especially the looks on children’s faces when they see their old bikes transformed.

When he looks at a bike he says he sees “a thing of beauty.”

“If you clean off the dirt from the tires, put new handgrips on,” he said, “before you know it, it will be … something that will just delight the heart of some little girl someplace.”

One father sent Jackson this text: “Thank you for the wonderful gift today. We had a great daddy-daughter bike ride and she was all smiles.”

“That’s the kind of thing that makes my day,” Jackson said. “That’s my reward.”

And during times like these, there might be no better reward than the smile of a child.

Retired mathematician Ric Jackson has fixed more than 650 bikes for free during the pandemic.

Letter From The Editor: CDC answers its many critics

CBS executives placed on leave after reports of “racist” and…

Former casino CEO, actress identified as couple who flew to Yukon, got COVID-19…

Lynn Beyak, the senator who defended residential schools, is resigning

Too many new pet owners, not enough vets make getting animal care a problem

Skepticism of celebrity should be a key factor in governor…