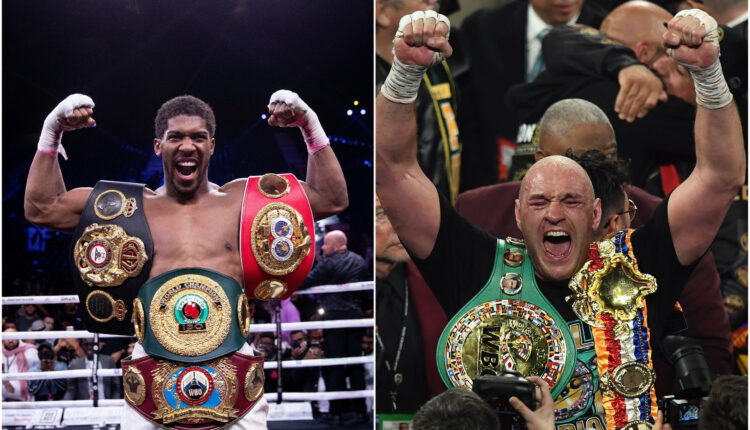 Ricky Hatton column: Anthony Joshua and Tyson Fury must move on after tragedy for British boxing

Fury vs Joshua collapse is a tragedy

If Tyson Fury vs Anthony Joshua does eventually happen it will go down as the biggest fight in British boxing history, the two heavyweight champions at the top of the game.

But it would be a tragedy for British boxing if this fight doesn’t take place. It is bad enough it was going to be held in Saudi Arabia when ideally a fight of this size should be held at Wembley. But at least it was going to happen. But now it looks like there is another spanner in the works.

I’m a former world champion and a trainer now but ultimately, I am a fight fan. It seems like it has always been one step forward and two steps back with this. And it’s a crying shame.

AJ used to these problems… but Fury is p****d off

AJ has had a few changes of opponent in the past but he was also highly successful as an amateur obviously with the Olympic gold medal. Sometimes when you’re an amateur fighting in the Olympics or world championships or European championships, you don’t know who you are fighting until the bell goes!

The fact that he has boxed at that level as an amateur and he has had a couple of opponents pull out in the past, that will stand him in good stead.

I think Tyson is the one who has been banging the drum for this fight. I’m not being disrespectful to AJ, but Tyson has been the one banging the drum longer than AJ has, the one saying; ‘Come on let’s get it signed.’

Tyson is a fighting man, he just wanted to get it done. Get it sealed. And I think the longer it goes, the more it will p**s him off, more than AJ even. AJ might be a bit more used to it but Tyson, I think he’s only bothered about one more fight and that is this one. And then he wants to hang them up.

Joshua and Fury have to move on

This is exactly like what happened with Manny Pacquiao vs Floyd Mayweather. Five or six years in the making. And I don’t think either of these lads are going to wait. If it doesn’t happen soon I don’t think it will happen.

It should happen, it should happen for British boxing, but both lads have to get on with their careers. And that’s what they will do, not against each other but against someone else. Which would be a shame.

Nobody has been through what Tyson Fury been through from a mental health point of view, with the problems he’s had and his addiction problems over the years. And he’s come good. He wanted to come back, wanted to get in and fight the best but his career is now stalling a bit.

Everyone’s career has stalled with Covid, it’s been a really frustrating time but Tyson came back, had two warm up fights and went straight into Deontay Wilder. It’s what he’s all about, he wants to fight the best. He got the draw where we all thought he won and he went into the rematch and absolutely destroyed Wilder. The only person that in Tyson’s mind was left was Anthony Joshua. Everyone has been sat dormant waiting for it to happen and it’s not happened.

Fighters want the big fights. You go into boxing to prove you are the best. AJ will want the fight. Absolutely no doubt. I think Tyson would absolutely want the fight, no doubt. And if it doesn’t happen I will not be pointing the finger at AJ, or Tyson. It will be politics.

Wilder has impressed me

I’ve been watching him on social media, he’s been in the gym and he has altered a few things stylistically, he’s looking a little bit more calm and a little bit more fluid so obviously he’s got his head screwed back on because to be honest, I thought it had fallen off. I was worried about him as a fellow professional.

It must have been a hard defeat to take, it must have hit him really, really hard to accept being destroyed in the manner in which he was. I wondered if he was having a meltdown because some of the things he was coming out with were ludicrous. Claiming I had put a metal plate in the gloves. My God.

You’re having a pop at your fellow professionals and world champions which I thought was in bad taste. But he seems to have his head back on, he’s in the gym training and looking to try and improve where he went wrong technically in the last fight. I was genuinely worried for him, I didn’t get upset when he said the comments about me, I just thought that is not coming from someone who is in a normal place of mind. Now it seems he has now got a bit of pulling power with this fight.

We are going to unearth some homegrown talent with Fightzone, no doubt. What a fantastic thing to do, to be able to see someone brought through, watch their first fight and then get to see them get to world level, seeing it all from day one.

You dream of getting on TV, getting the opportunity to impress. It’s the toughest sport in the world. These unbeaten youngsters have just come out of lockdown, going from not having a single fight, no hopes of a bright future with nothing in front of them to all of a sudden, they are fighting on the box.

We needed something like that to revitalise these youngsters. During lockdown with no gyms open, no crowds and no small hall shows, you wouldn’t blame a lot of these unbeaten prospects on this card for chucking the towel in and packing the game in out of frustration because there was no light at the end of the tunnel. But they have got the light at the end of the tunnel now.

Myron Mills vs Lucas Ballingall headlines the card on Friday. It’s an exciting English lightweight title fight to get us started, two young unbeaten prospects. Even though it’s a great fight between two youngsters with similar records, it’s an opportunity to be seen that they might have not got elsewhere. And when you look at the undercard, there are so many unbeaten prospects there that are given the opportunity to show what they have got. It’s going be a good night for boxing.

Visit www.fightzone.uk and join the revolution.