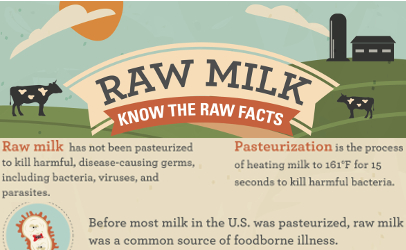 Health officials in Idaho are seeing an increase of Campylobacter illnesses they say are often associated with unpasteurized, raw milk.

“Consuming raw, unpasteurized dairy products increase the risk of foodborne illnesses including Campylobacter, E. coli, Salmonella, and Listeria,” according to the department’s notice.

“Providing raw dairy products to family members, particularly those considered members of high-risk groups, can be dangerous and in some rare cases, fatal.”

Those at higher risk of illness after consuming raw, unpasteurized milk include young children, teenagers, pregnant women, the elderly, and those with compromised immune systems from diseases such as HIV/AIDS, cancer, and diabetes, according to the public notice.

The health department is working in conjunction with the Idaho State Department of Agriculture (ISDA) and Idaho Department of Health and Welfare (IDHW) in educating dairy operators and the public about the inherent risks of consuming raw dairy products, including milk.

Campylobacter is often found in unpasteurized, raw dairy products and is the most common bacterial cause of diarrheal illness in the United States according to the health department. Common symptoms of Campylobacter infection include diarrhea (often bloody), fever and stomach cramps. Nausea and vomiting may accompany the diarrhea. These symptoms typically start two to five days after the person ingests Campylobacter and lasts approximately one week.

If a person is experiencing these symptoms after the consumption of raw dairy products, seek medical attention.

To avoid illness from Campylobacter: