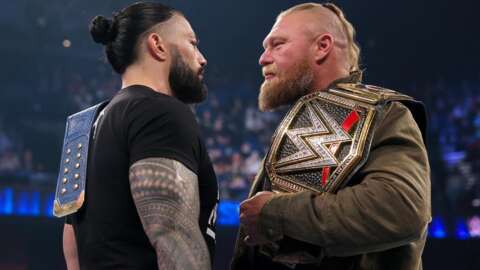 Roman Reigns and Brock Lesnar are headlining Wrestlemania. What happens when the Beast meets the Tribal Chief?

On April 3, Roman Reigns, the current WWE Universal Champion, will take on Brock Lesnar, the current WWE Champion, in a winner-takes-all title unification match at Wrestlemania 38. It is the ideal outcome to the past seven years of in-ring storytelling; the two most dominant wrestlers on the entire roster will determine who is the best of the best, at the biggest live wrestling event of the year.

It is the most anticipated match of the entire two-night event. Both men are believable, physical performers–their auras are intimidating, their moves look like they could cripple someone, and when they get hit, they look like they’re genuinely injured. They appear to be, in short, what the best professional wrestling strives to be: real. And that’s a rare commodity, especially when modern day wrestling is more concerned about performing moves than telling a story to explain why those moves need to be performed.

Thus far, Lesnar and Reigns have met in 1-on-1 competition on five separate occasions. In anticipation of this Sunday, we’re looking back at all five matches to examine their quality, their storytelling, and what they might portend about this latest chapter in their feud. Spear or F-5? Suplex City or Superman Punch? It all comes to a head at Wrestlemania 38 on April 2 and April 3, streaming exclusively on Peacock in the United States and on the WWE Network everywhere else.

Wrestlemania 31 for the WWE Championship

Lesnar and Reigns’ first encounter remains the most compelling of the five. From a narrative standpoint, the two faced an uphill battle that year. Reigns was the Royal Rumble winner and No. 1 Contender that no one wanted–the logical end result of pushing a guy to the top instead of letting him find his way there, organically, by playing off the fans.

Reigns, the ostensible babyface, walked into Levi’s Stadium to a chorus of boos. But by the end of the match, he had earned much of the crowd’s respect by taking the hardest shots that Lesnar could throw at him (scripted or not, a lariat on the apron does not tickle), smiling, and asking for more. Lesnar got bloody, which added to the drama. It was all going perfectly for Reigns, until Seth Rollins’ music hit and turned the match into a Triple Threat, which Rollins then won. But the one-on-one fight beforehand was everything a main event should be: a violent, believable clash between superstars.

Wrestlemania 34 for the WWE Universal Championship

Three years later, Lesnar and Reigns had their Wrestlemania rematch, this time in New Orleans. Still, the crowd was hostile to Reigns. Still, the two men faced an uphill battle —of transferring sympathy to a babyface who, just a year prior, had seemingly retired the Undertaker at Wrestlemania (though that wasn’t the case, ultimately).

They tried to run the same playbook that they did at Wrestlemania 31: beat the hell out of Reigns, to the point where even if you didn’t like the guy, you had to admire his resilience. Lesnar suplexed him, gave him six F-5’s, and cracked him across the brow with an elbow,which sent blood pouring down his face. It felt like overkill. And then Lesnar pinned Reigns. There was no comeback, no redemption after taking all that abuse.

When Lesnar went backstage after the match, he was so pissed off threw the championship at WWE Chairman Vince McMahon. Was it a work or a shoot? Either way, the match was a disaster.

The Greatest Royal Rumble for the WWE Universal Championship

So on paper, this seemed like a smart idea. Since WWE didn’t pull the trigger at Wrestlemania 34 by giving Roman Reigns the Championship, the company could run it back at the first massive Saudi Arabia show in Jeddah. It was a high-profile event, and the crowd of foreign, casual fans could give Reigns a positive, babyface response to a hard-earned victory. The match stipulation was a Steel Cage, which teased the type of brutality we saw at Wrestlemania 34.

But for some bizarre reason, Roman lost again. He speared Lesnar through the cage door, and since Lesnar was lying on the cage and Roman rolled off it, his feet technically touched the floor first.

It’s worth noting that Brock was, at this point, a seldom-seen attraction. He worked a part-time schedule, which meant he only showed up for a handful of TV episodes plus a few PPVs each year. Reigns losing again was simply ridiculous. A week or so prior to the match, Samoa Joe cut a promo where he stated the obvious–that every time Reigns met Lesnar in the ring, he got jacked up. He had a point.

Summerslam (2018) for the WWE Universal Championship

Finally, Reigns got a win. And by doing so, he took the Universal Championship title off Lesnar, ending his reign at 503 days. It was a consecutive-day record that would stand until Reigns himself broke it–he is the current Universal Champion, and has held that title for over 570 days.

Of course, there was an asterisk next to this match, which allowed Lesnar to save face, even in defeat. Braun Strowman was camped out by ringside with the Money in the Bank briefcase, and Lesnar wasted too much energy beating up Strowman–thus preventing a cash-in–rather than beating up Reigns. But still, a win is a win is a win.

Several months later, Roman Reigns announced that he had been diagnosed with cancer and needed time off for treatment. He relinquished the Universal Championship on Raw.

If this match didn’t take place then the upcoming match at Wrestlemania would be even more anticipated. But at Crown Jewel at the end of last year, we got a preview of Wrestlemania’s main event, when Lesnar took on Reigns for the WWE Universal Championship.

Reigns won the match, which largely focused on manager Paul Heyman’s allegiance: was he Reigns’ Wise Man, or was he Lesnar’s Advocate? It’s the first time that Lesnar and Reigns faced each other as their new, revamped characters. Reigns was now a monster heel–the Tribal Chief who demanded obedience from both his family and the WWE fans. And Brock on the other hand, was a kickass babyface, more prone to smiling and wearing cowboy hats than his typical scowl.

Reigns won the match via pinfall, by way of interference; his cousins the Usos kicked Lesnar in the head when the ref wasn’t looking, and Reigns used the title belt to clock Lesnar and finish the job.

The story that’s been told, in multiple iterations over the past eight years, is that Reigns cannot beat Lesnar if the playing field is equal. When he doesn’t outright lose, he always needs some assistance, whether it be from Braun (unintentional) or the Usos (intentional), to secure the win. Reigns does not have a clean win over Lesnar–an unimpeachable victory where one can say, decisively, that the torch has been passed. When you count it up, Reigns and Brock both have two wins over the course of five encounters. The main event this Sunday will be the rubber match that breaks the tie.

Reigns is probably going to win on Sunday night, but it also matters how he wins. He’s at the height of his career, and let’s hope that WWE gives him the decisive victory he needs to elevate him as one of the greats.