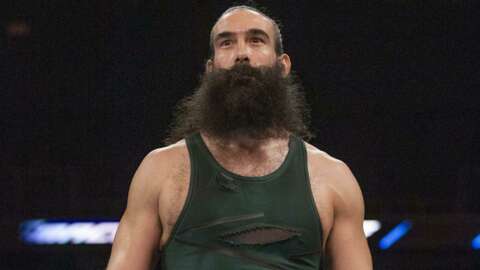 At the , The New Day–Kofi Kingston, Big E, and Xavier Woods–showed off their brand-new in-ring gear, which paid tribute to the late John Huber, better known to WWE fans as Luke Harper and to many more wrestling fans as Brodie Lee.

The gear included a visual collage of Huber on the backs of their jackets and images of Huber on their pants’ thighs. They also incorporated red and black plaid patterning into the design, which Huber frequently wore during his WWE run.

From 2012 to 2019, Huber performed in WWE as Luke Harper, the “prodigal son” of Bray Wyatt’s stable, The Wyatt Family. He held both the WWE Intercontinental Championship and the WWE Tag Team Championship with frequent tag partner and fellow Wyatt Family member Erick Rowan. The Wyatt Family was involved in a number of high-profile feuds with other stables including The New Day and The Shield (Dean Ambrose, Seth Rollins, and Roman Reigns).

In 2020, Huber, now going by his pre-WWE alias Brodie Lee, debuted in AEW as the leader of the Dark Order stable. This culminated in him winning the AEW TNT Championship this past August.

Huber died from a non-COVID related lung issue on December 26, 2020. He is survived by a wife and two sons. In the wake of his death, wrestlers across multiple companies paid tribute to Huber as both a wrestler and a dedicated family man. Big E in particular was very close to Huber. On the , Huber’s widow Amanda confirmed that Big E was one of the wrestlers who visited Huber on his deathbed, and later went to the hotel to comfort her son, Brodie, Jr., about his father’s passing.

The 2021 WWE Royal Rumble is currently airing on the WWE Network, on January 31. Follow Gamespot for , , and .

Royal Rumble 2021: The Biggest Surprises From The WWE PPV