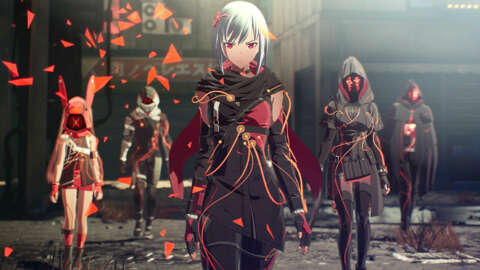 The story of Scarlet Nexus might be a mess, but fun action and great character moments make it worth your time.

Scarlet Nexus takes us to a world where humans have developed psionic powers and the ability to connect their minds to each other. This has dramatically transformed life as we know it, allowing for a new era of connected consciousness and advanced technology. However, things aren’t all sunshine and roses for humanity–the populace lives in fear of the Others, grotesque brain-consuming monsters that randomly emerge from a mysterious belt that surrounds the planet. Their destructive impulses have rendered many areas uninhabitable, forcing humans to congregate in cities under the protection of the Other Suppression Force–an army of elite psionics trained to handle Other attacks. Yuito and Kasane are two fresh-faced recruits to the OSF, and they find their skills quickly put to the test during attacks. When a mission goes awry, they will be forced to take sides and fight to expose disturbing truths lying under the surface.

The setting of Scarlet Nexus is an intriguing mix of cyberpunk imagery, dystopian society, and pure sci-fi that captures your attention immediately. You get the feeling from the get-go that something is off about everything that’s going on, which only increases when you first lay eyes on the Others–horrendous aberrations that mix familiar organic and inorganic objects into monsters that move like living creatures, but feel disconcertingly unnatural. Additionally, the cutscenes are primarily presented in the form of comic-style still panels, giving the game the distinct feel of a high-stakes, episodic manga. It’s slick and distinct, which gives Scarlet Nexus a lot of personality.

You begin the game by choosing either Yuito or Kasane as your primary playable character. Yuito is a fairly standard action-game swordsman, while Kasane is more of a technical fighter with her ranged daggers. Both characters have combo attacks, jumping strikes, dodges–the usual array of 3D combat maneuvers. However, they also have the ability to use psychokinetic powers, introducing an additional unique element to combat. By holding R2, they can grab a background object and slam it directly into a foe, potentially catching the enemy off-guard and opening them up for further combo attacks.

Combat doesn’t feel exceptionally good initially–it’s a little floaty and disjointed, especially when playing as Kasane. Chaining attacks together, in particular, can be hard on more resilient foes in the early stages. But it quickly improves with the addition of the SAS: a system where your playable character can connect their brain to other squad members and temporarily make use of their powers. Hook up with Hanabi, and she’ll give you pyrokinetic fire slashes that can set enemies ablaze. Borrow Kagero’s invisibility to hide from aggressive foes and you can perform sneak attacks. Utilize Tsugumi’s clairvoyance and you’ll be able to spot hidden enemies and weak points, and tap into Gemma’s sclerokinesis to quickly mitigate enemy attacks. Using these skills transforms combat from a fairly standard affair to something much more interesting, as certain abilities will be particularly advantageous in given situations–but you also have to learn to manage these skills, as they are all on cooldown timers.

Even more combat augmentations open up the further you go into the game. As you level up, you can fill out nodes in your Brain Map, which unlock special skills that grant new offensive and defensive capabilities to utilize in battle. You’ll also learn the Brain Drive, a super-powered mode that activates after filling a gauge that increases your damage output and combo ability. Finally, there’s the Brain Field: an absurdly powerful but extremely risky state that puts your psychokinesis into overdrive and lets you deal massive damage, but can kill you if you stay in it for too long.

More mechanics get added into the mix, as well. Guard meters are introduced. Using the right skills and attacks you can break them down to render enemies helpless and perform a devastating Brain Crush attack for bonus loot. Unique objects also appear in environments that allow you to perform elaborate and immensely satisfying QTE-powered psychokinesis attacks, like pounding an Other into the ground with a marble statue or running over a line of enemies with a runaway train. And by establishing a good rapport with your teammates, you unlock the full potential of their abilities as well as new options like follow-up attacks on downed foes.

Outside of the story missions needed to progress, you can revisit already-explored areas for experience and sidequests. These sidequests are the standard-issue “kill enemy X” or “collect item Z” missions, sometimes with additional requirements like defeating foes with a certain SAS power. They don’t add much to the game in terms of story or worldbuilding, making their role that of an excuse to revisit areas to farm experience and items. Collecting enemy drops and environmental data is important, however, as you can trade those items at the store for exclusive weapons, upgrade plug-ins, and most importantly, items to give to your teammates during story breaks.

Giving your crew things they like raises their affection for you, unlocking “Bond Episodes” where you can hang out and learn more about their individual quirks and backstories. As their bond levels raise, you’ll have access to improved SAS functionality and additional attack and defensive options. They’ll also use their presents to decorate your team base, which is a nice visual touch. Bond Episodes range in tone from the completely ridiculous to dead serious character drama, but no matter what you wind up seeing, you’ll come out of it appreciating your in-game teammates even more.

It’s a good thing that the combat and character interactions of Scarlet Nexus are fun, because its story is a trainwreck. What starts as an intriguing sci-fi tale of superpowered youths being used to fight hideous creatures by a shadowy government gets completely derailed after a few chapters, becoming a hodgepodge of increasingly bizarre plot twists and inexplicable character actions. While you get different perspectives (and different progression) depending on your choice of Yuito or Kasane as your lead, you’ll still experience the same major “WTF was that nonsense?” events.

While I won’t get into spoiler territory, a good example of how frustrating the plot can get is realizing that most of the mid-game conflict could be easily resolved if everyone would just sit down and talk about what’s going on (which Yuito repeatedly asks to do) instead of trying to kill each other. What’s even more befuddling is that some of the enemy characters still ask to hang out with your lead while this stuff is going on, making for a bizarre disconnect between narrative and characterization. Even once all that is resolved, there are numerous plot threads that become incredibly flimsy when you give them deeper thought. But as ridiculous as the story wound up being, I was interested in seeing how much more utterly bonkers it could get throughout, so I guess that’s something in its favor

Even though the plot devolves into a trope-filled sludge pool by the end, I don’t feel like Scarlet Nexus was a waste of time. Yes, the excitement of combat begins to taper off towards the end of Scarlet Nexus’s twenty-odd-hour runtime–and the areas in the final stretch of the game feel overly long–but I had a good deal of fun mixing up my SAS abilities, crushing enemies in my Brain Field, and watching my team have a video game tournament at our base to settle an argument over living space boundaries. It might not be a new pinnacle of action-game storytelling, but Scarlet Nexus is still plenty of fun in the right places.