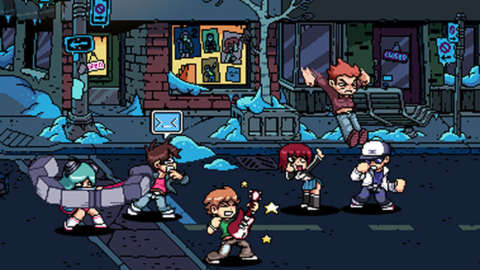 Scott Pilgrim vs. The World: The Game was delisted from the Xbox 360 and PS3 digital stores at the end of 2014, and since then there’s been a lot of call to bring the fan-favorite game back. In May, tweets from writer Bryan O’Malley, film director Edgar Wright, and Ubisoft seemed to hint at the possibility, but we’re yet to hear anything firm. But there’s some reason for hope of the game’s return.

Now, as the campaign continues to grow, there’s been a hint of actual discussion taking place about the game’s return. After Kotaku posted an article about the game being unavailable, which was shared on Twitter by Anamanaguchi (the band behind the game’s iconic soundtrack), a new wave of discussion started. This has been further exacerbated by the fact that August 13 (today) is the 10 year anniversary of Edgar Wright’s film adaptation of Bryan O’Malley’s original book.

On Twitter, O’Malley has given us some hope with a short, sharp tweet, indicating that Ubisoft has reached out to him to discuss the game. Although the author’s Twitter account is fairly new, a high portion of his tweets have been about the game, and the fact that Ubisoft had, up until now, not spoken to him about it.

PS. ubisoft has reached out to me

This doesn’t mean that the game is coming back right away–but we suspect that if the call had been bad news, O’Malley would have tweeted that.

Here’s Edgar Wright’s response, which we have no specific further comment on but which we must share regardless.

If you’re revisiting the Scott Pilgrim film for its anniversary, be sure to look out for these 45 Easter eggs.