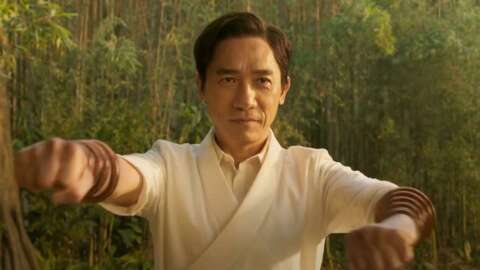 Shang-Chi And The Legend Of The Ten Rings Ending Explained: What Does It Mean For Phase 4?

While Black Widow may have been the first official entry into the MCU’s Phase 4, its flashback status (and the ultimate fate of Black Widow herself) made it a foregone conclusion. This isn’t the case with Shang-Chi and the Legend of the Ten Rings, which adds a laundry list of new characters and concepts to the Marvel multiverse at large, and teases some massive developments for the future of Phase 4 and beyond. Here’s what happens at the end, and in both of the post-credits scenes.

Naturally, we’re getting into spoilers here so this is your chance to duck out if you haven’t seen the movie.

The final battle between The Dweller in Darkness and The Great Protector (aided by Shang-Chi, Katy, and Xialing) takes place in the mystical realm of Ta Lo, where Wenwu (AKA The Mandarin) believed his wife was being held captive. In reality, however, the Dweller In Darkness had been manipulating Wenwu into setting it free, sort of like an eldritch monster in a Lovecraft story. Wenwu realizes his mistake a bit too late, and is killed after he makes a last ditch effort to right his wrongs and pass the ten rings to Shang-Chi.

Armed with them, and with the help of both Xialing and Katy, as well as the remainder of the Ten Rings army and the residents of Ta Lo, Shang-Chi is able to subdue The Dweller in Darkness and save Ta Lo. With that issue out of the way, Shang-Chi and Katy are able to return back to San Francisco where they’re left floundering to explain exactly what happened to them (and that they’re both basically superheroes now) to their civilian friends, who don’t really buy it.

That is, until Wong–yes, that Wong, from Doctor Strange–shows up in one of his trademark portals in the middle of the bar, asking both Shang-Chi and Katy to come with him. He takes them back to Kamar-Taj, where he explains (with help from Bruce Banner and Carol Danvers) that their lives will never be the same, now that they’re on this path, and they’re desperately needed.

The biggest and most important implication here is that it won’t just be Shang-Chi moving forward in the MCU, it will be Katy as well–and what that means is difficult to predict, given that she was invented as an original character for this movie and has no comic book history to look back on. Katy, unlike Shang-Chi, does not have any magical powers or lifelong training and instead, will likely be honing her abilities with her recently acquired bow and arrow–which might make her an asset (or a rival) to someone like Kate Bishop in the future, depending on how the Hawkeye Disney+ show pans out.

Also notably, Shang-Chi is armed with the ten rings, which are a mysterious element in and of themselves. They made Wenwu immortal while he had them, and could very well extend the same powers to Shang-Chi himself–but the limits of that immortality (aside from the basics of never aging or falling ill) aren’t really explained. It’s difficult to guess if they also mean complete invulnerability or healing as well. There’s also some loose implications in the film that the rings exert a sort of Lord Of The Rings-style thrall over the person wearing them, or at least make them more susceptible to manipulation, but again this is never really explicitly detailed. We know that Wenwu started to backslide into villainy after the death of his wife, which led him to never again remove the rings, and that there seemed to be a relationship between his reliance on the rings and the whispers of the Dweller In Darkness, but this could also be a function of grief and not a direct correlation.

The question of what exactly the rings themselves mean is likely going to be a major factor in Shang-Chi’s story moving forward, based on the first post-credits scene. In it, we see Wong, Captain Marvel, and Banner examining the rings in private. Wong explains they’re unlike anything they have in the Kamar-Taj archives, and they seem to be emitting some sort of signal–though to who or what, they can’t be sure.

Now, in the comics, the ten rings are much, much different than they are in the MCU. They function more like a set of mini-Infinity Stones with each being assigned a specific type of power that The Mandarin can control, rather than a set of bracelets that can zoom around and conduct energy. Still, it’s worth noting that in the comics, the rings’ origin is an alien world called Maklu-IV where they were created as a sort of interstellar power source before they accidentally crash landed on Earth.

It does look like Wong’s map is pointing to somewhere out in space for the “beacon” being sent by the MCU rings, but it’s really impossible to narrow it down much more as of right now–and, given what we know about the multiverse situation thanks to the end of Loki, we could be looking at any number of metaphysical things happening here, like an alternate Earth’s version of Wenwu or Shang-Chi for example. Our best bet for clarity is likely going to come in the upcoming Doctor Strange in the Multiverse of Madness, where, even if Shang-Chi doesn’t appear, Wong most certainly will.

This brings us to the second post-credits scene which teases the future of Xialing, who has filled the power vacuum at the top of the Ten Rings organization and begun training women foot soldiers alongside the surviving men from the battle of Ta Lo. It’s not clear what exactly Xialing intends to do with the Ten Rings now that Wenwu is no longer in power–we know the Ten Rings has existed for a very, very long time and has an extremely far reach, which makes the possibilities almost endless. This means the return of the Ten Rings organization could be heroic, villainous, or something in between.

It’s also difficult to tell exactly when they’ll be showing back up and what the context might be, as there are no real clues to be found in the sequence and no outside MCU characters making any references to them. For all we know, the rest of the characters in the MCU don’t even know the Ten Rings actually exist. It’ll certainly be interesting to find out more as Phase 4 continues.

Shang-Chi and the Legend of the Ten Rings is in theaters now.

STOP3000: Raising awareness of foodborne illness with every step