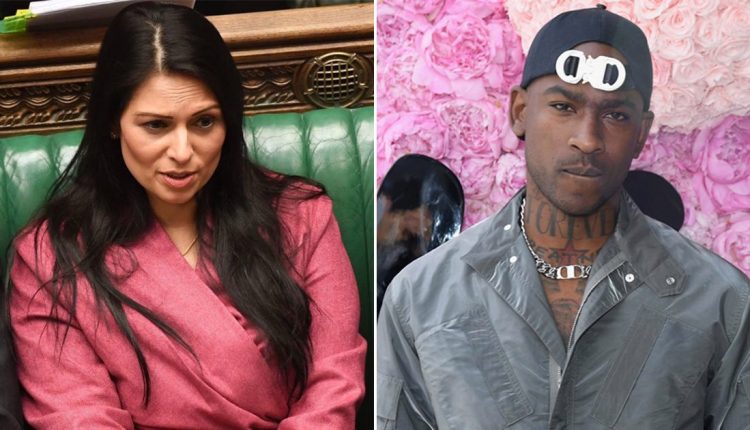 Skepta is a man of few words these days but his unexpected photo of Priti Patel could have come with at least a little explanation.

The Shutdown rapper had earlier in the day retweeted the now infamous video of Kanye West urinating on his own Grammy Award in the toilet during his epic three-day Twitter rant.

Skepta – real name Jospeh Junior Adenuga – then shared a photo of rapper Slowthai lying on a bed with his legs cut into slices like a cake, along with an image of a shiny red Ferrari and Wizkid’s track No Stress.

But perhaps his most confusing post was a photo of Home Secretary Priti Patel sitting in the House of Commons wearing a blush pink skirt suit.

The photo was from a Prime Minister’s Questions session on March 4 where she sat next to Boris Johnson.

Fans were left trying to decipher Skepta’s intentions with the photo but, clearly, they were just as confused as the rest of us.

Skepta, 37, previously implied that he was not a supporter of any political party after accusing politicians of ‘using’ the #Grime4Corbyn campaign to secure votes with youngsters.

The rapper told Q magazine in 2016: ‘When [the general election] was happening, everybody that mattered started to f*****g support politics and tell people to vote for people.

He continued: ‘We’re four months or whatever later and no one gives a s**t about it now, bruv…

‘They’re back to doing what they’re doing. They use us – them, not me – for what they wanted to use them for and they’re back doing their b******t. They need to understand we’re human beings.

‘When they wake up, they don’t think “we’re helping people, we’re telling people it’s their world, live peacefully”. They think “let me manipulate this country for my personal gain”.’

The rapper added: ‘Whatever they do on the TV or whatever, they never change in my eyes. F**k, I hate having spoken this much about it, but I’m so passionate about it. I saw people sell themselves for f*****g b******t. That’s the s**t I hated this year.’