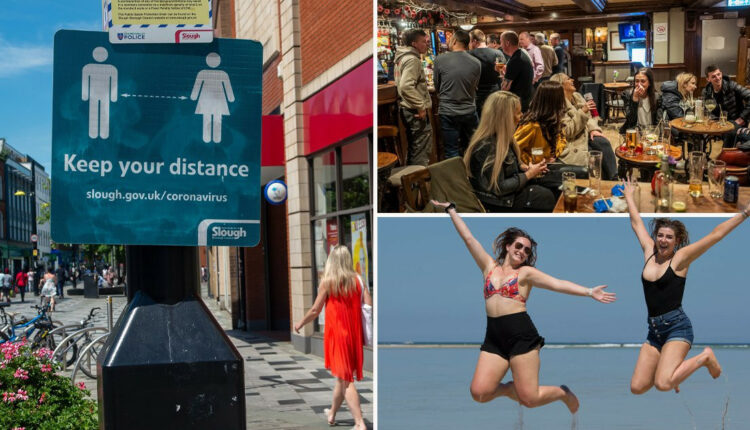 Social distancing ‘will be scrapped in England after July 19’

Rules on wearing face masks and social distancing are set to be relaxed in England on July 19, according to reports.

It will no longer be mandatory to wear a mask in public spaces including tubes and buses but may still be recommended in high risk areas, Whitehall sources have claimed.

The one-metre rule, the rule of six and the 30-person limit on outdoor gatherings are also likely to be scrapped.

Covid cases are soaring again across England but without a corresponding rise in hospital admissions and deaths meaning ministers are ploughing on with plans to unlock the country.

Boris Johnson has said some measures may still be necessary beyond so-called ‘Freedom Day’ but it’s hoped that this will be in the form of guidance, rather than legal requirements.

Details about what the country will look like after the big unlocking are expected to be released gradually in the coming days, with a final announcement planned for July 12.

A Whitehall source told The Guardian: ‘Any advice on masks is likely to be guidance rather than regulations. Our hope is that all legal restrictions can go.’

Politicians including the new health secretary Sajid Javid are said to be in favour of reopening all parts of the economy sooner rather than later.

Experts including England’s chief medical officer Chris Whitty are also thought to be increasingly confident that it’s safe for restrictions to end, at least over the summer.

The news will be welcomed by many, particularly those in the hospitality industry who are having to operate at a reduced capacity due to the one metre rule.

But many fear there will be another surge of the virus in the winter which could mean more measures are needed in a few months time.

The Mirror has reported the Government has drawn up a five year plan to protect the NHS against future waves, although the Department of Health denied the story.

The blueprint would include a ‘menu of options’ ministers could implement depending on the severity of the disease at that time and could see the return of masks, social distancing and limits on indoor gatherings.

Hospitals are wary that even a small rise in cases will place a severe burden on the health service, particularly as it is already busier than usual for this time of year due to pent up demand.

He said: ‘We want to get rid of as many restrictions as is safe to do so – I’m not going to be commenting on what measures will or will not be in place after step four.’

Birds took advantage of lockdowns by hanging out in the…