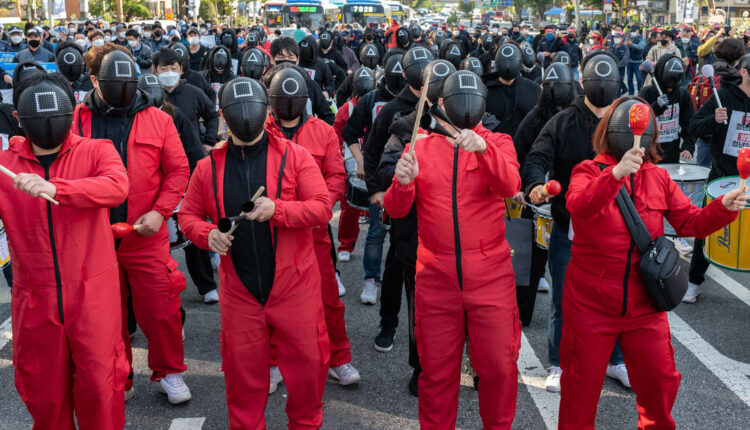 Members of the Korean Confederation of Trade Unions wear costumes from the Netflix series “Squid Game” for a march to Seoul City Hall, during a rally against the government’s labor policies, October 20, 2021 in Seoul, South Korea.

Seoul — Frustrated South Korean workers have sought to seize an opportunity presented by the huge popularity of Netflix’s “Squid Game” to draw attention to their demands for better employment conditions. Thousands of people staged demonstrations in Seoul and elsewhere on Thursday, many in costumes inspired by the gruesome show that was itself inspired by the dire economic conditions facing many South Koreans.

“Squid Game,” one of Netflix’s most popular shows ever, is about hundreds of cash-strapped South Koreans lured into competing in series of simple games for a massive cash prize, but the penalty for losing any of the six stages is an instant and brutal death. It was inspired by the conditions for normal South Koreans following the global economic collapse in 2008.

The main character is the series, Seong Gi-Hun, is autoworker who lost his job when the company he spent years working for went bust. His flashbacks draw stark parallels to the real-life 2009 bankruptcy of the Ssangyong automaker, and the subsequent violent crackdown on laid-off employees who occupied its factory, demanding their jobs back.

Foreign viewers may be surprised by the extent to which the dramatic narrative has resonated so strongly with South Koreans, who face daily challenges in a highly competitive society that many believe values hard work and personal sacrifice over well-being.

The Korean Confederation of Trade Unions (KCTU) made that, and “Squid Game,” their central theme in organizing the rallies on Wednesday. The group even produced a “Squid Game”-style promotional video for social media featuring South Korean workers, or actors portraying them, touting support for the various labor unions and calling for government help.

Despite a COVID-19 restriction banning gatherings of more than 99 people, the police estimated that about 16,000 people joined the demonstrations across the country on Wednesday, the largest one being in the capital.

KCTU called the general protest action “the first step towards overcoming inequality in the world.”

“We continue to move forward to a world of equality with the cries of workers who filled the streets and resounded across the country,” the group said, demanding an end to irregular employment contracts and laws they say fail to protect employees in small companies, with fewer than five employees, from discrimination.

The KCTU also called for the right for all workers to form unions; for the government to take more responsibility for ensuring job security as the country’s economy transitions from industry to services; and for the strengthening of public transportation networks, medical care, housing and education.

While South Korea has had relatively low numbers of COVID-19 cases and deaths, its economy was hit hard by the pandemic. While citizens struggle through the hard times, they’ve been hit with regular stories on the news about the rich and powerful engaging in multi-million-dollar corruption and embezzlement cases. A presidential candidate is among the latest power-players to be caught up in such a case.

And South Koreans have seen it all play out as major business conglomerates slash new recruitment, pushing many people to take on second and third jobs to cope with the instability of low-hour, limited contract or no-contract work.

A member of the Korean Confederation of Trade Unions in a “Squid Game” costume marches to Seoul City Hall during a rally against the government’s labor policies, October 20, 2021 in Seoul, South Korea.

Opponents of the union protests have been quick to point out that large gatherings like Wednesday’s violate the country’s coronavirus control measures and risk increasing infections, which could further harm the ailing economy.

“Considering that we’ve come to a relatively stabilized COVID situation, while the whole nation is preparing for daily recovery with one mind and heart, we hoped the Korean Confederation of Trade Unions would refrain from going on strike on a grand scale, but it turned out to be a disappointing result,” a Blue House spokesperson said on Thursday.

Little sympathy from those in charge for the losers in this game.