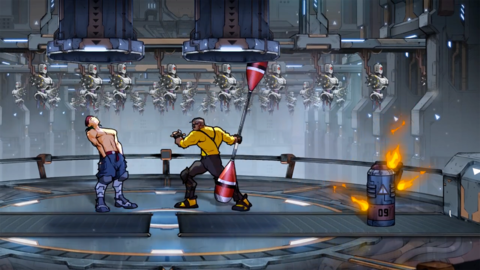 After launching on July 15, the latest DLC for Streets of Rage 4 is finally available for Switch users to purchase. The DLC, which players on PS4, Xbox One, and PC have been able to purchase since launch, has been unavailable to players on Nintendo’s console due to a bug.

According to a tweet from developer Dotemu, Streets of Rage 4 players can download the Mr. X Nightmare DLC starting today, and even at a 15% discount until July 29. The DLC adds a healthy dose of new content to the game, including a new survival mode and moves for each character on the roster. Speaking of which, the Mr. X Nightmare DLC also expands Streets of Rage 4’s roster with the addition of three new characters: Estel Aguirre, Max Thunder, and Shiva.

Originally, players could not pick up the latest expansion for Streets of Rage 4 due to a “technical issue” that was discovered by Dotemu on July 15, when Mr. X Nightmare launched. A fix for the bug was prepared just days later on July 19 but has been under review for approval by Nintendo. According to Dotemu, the approval process was shortened due to this case. “The process usually takes several days, however, given that situation, the validation timeframe will be shortened,” the company said.

While Switch players haven’t been able to access Streets of Rage 4’s latest DLC, they did receive a significant patch. The most recent patch for the game changed its combat system, allowing players to string together moves to perform combos. Players will also find that a majority of the cast has been rebalanced.