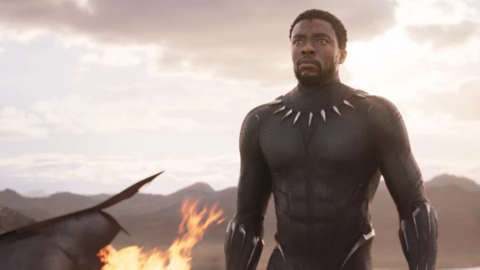 The world was stunned to learn that Chadwick Boseman had passed away in late August. The actor passed away after a four-year battle with colon cancer. Throughout his battle, Boseman still found the time to visit children with cancer, which he kept private. Now, there is an art piece honoring the late actor and Black Pnather star at Downtown Disney.

Artist Nikkolas Smith revealed the piece on Instagram. “To millions of kids, T’Challa was a legend larger than life, and there was no one more worthy to fill those shoes than Chadwick Boseman,” Smith wrote. “I’m so thankful to be able to honor Chadwick’s life and purpose in this way.”

Smith stands in front of the piece which features Boseman and a child in a hospital gown in the “Wakanda Forever” pose, a beautifully fitting piece to honor the actor that made so many people happy and have them so much hope for his role of T’Challa in Marvel’s Black Panther.

ABC honored the late actor, who also portrayed culturally-iconic Americans like Jackie Robinson in 42 and James Brown in Get On Up, with a 20/20 special titled “Chadwick Boseman: A Tribute For A King,” which is now available on Disney+. Over on Netflix, Boseman also recently appeared in Spike Lee’s Da 5 Bloods, which GameSpot gave an 8/10 in its review of the movie, where Dan Auty said, “Da 5 Bloods works superbly as a thrilling action adventure, but it’s the way it also confronts uncomfortable truths about America’s past (and present) that makes it one of the director’s best films.”